BURLINGTON, Vt., Jan. 28, 2021 /PRNewswire/ -- Over the years, there has been one consistent thread in Ben & Jerry's offerings, regardless of the social justice connection, partner, or playful name: the flavor must be delicious. Enter Ben & Jerry's latest ice cream innovation, Topped, a new line of seven unique flavors covered with a chocolatey ganache. 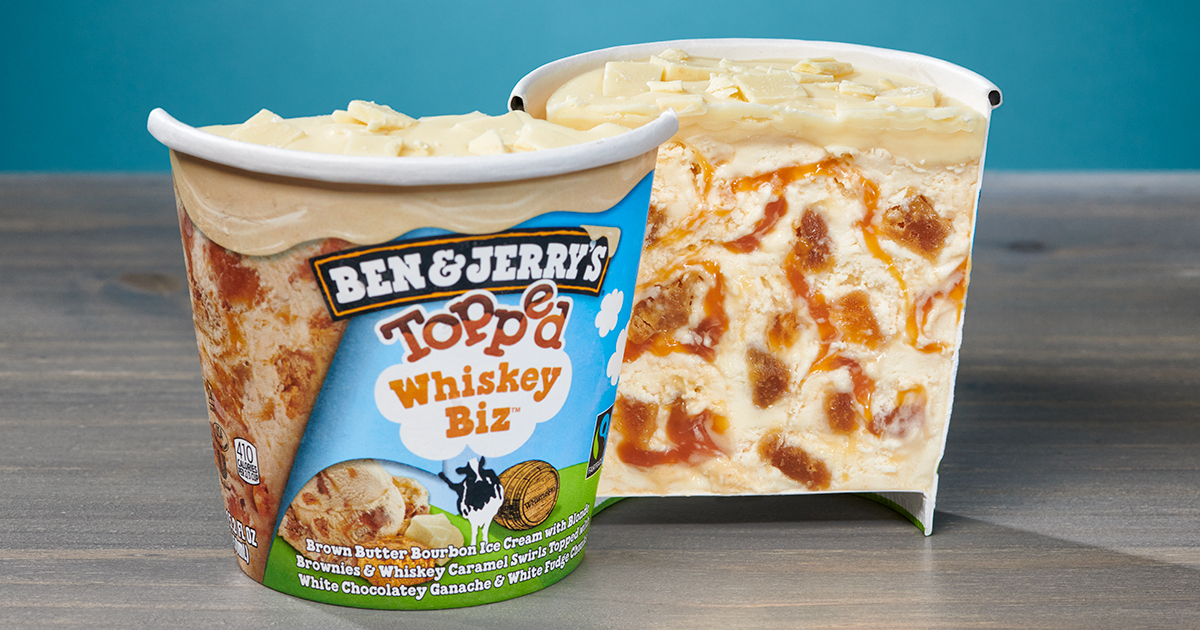 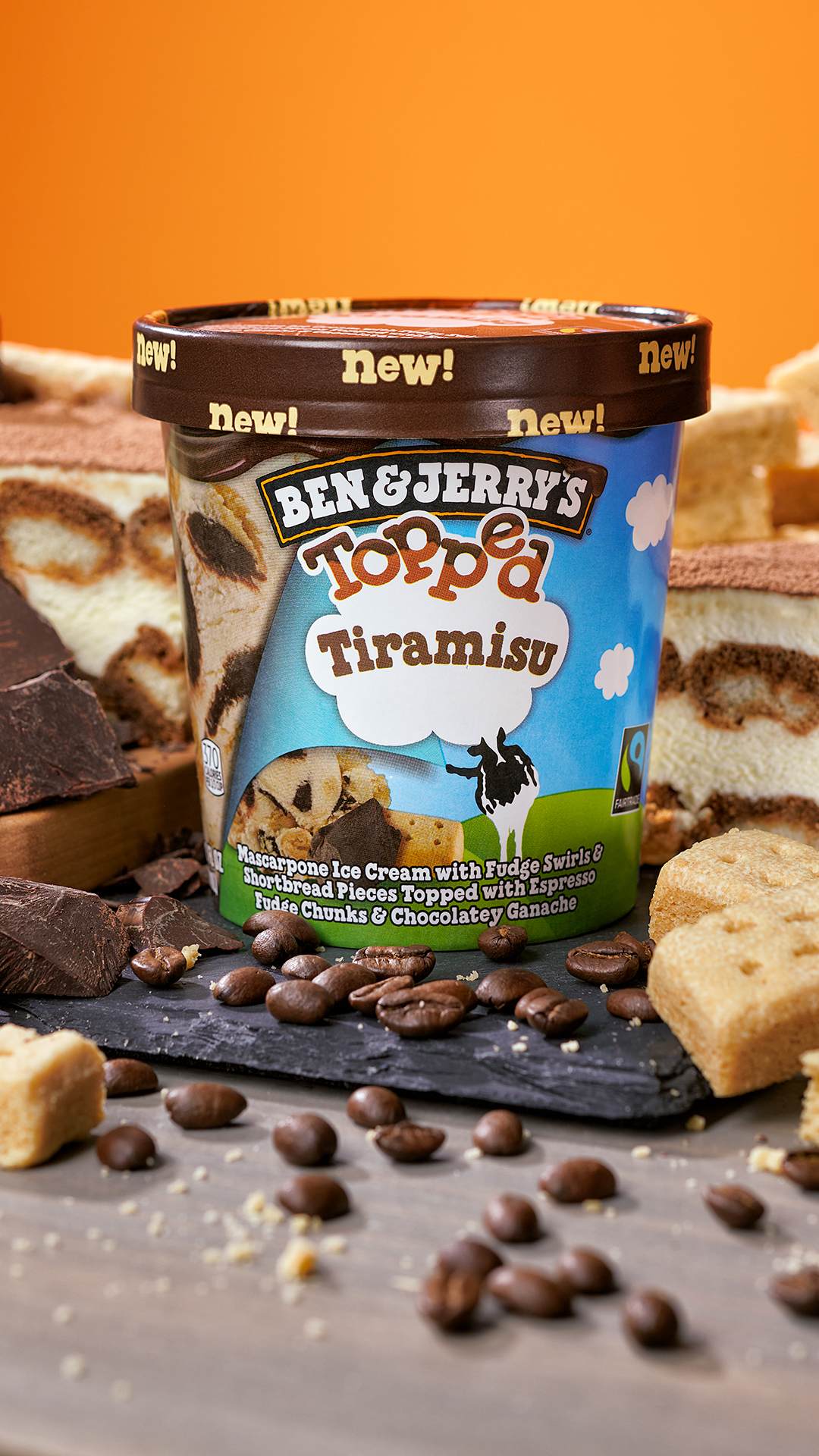 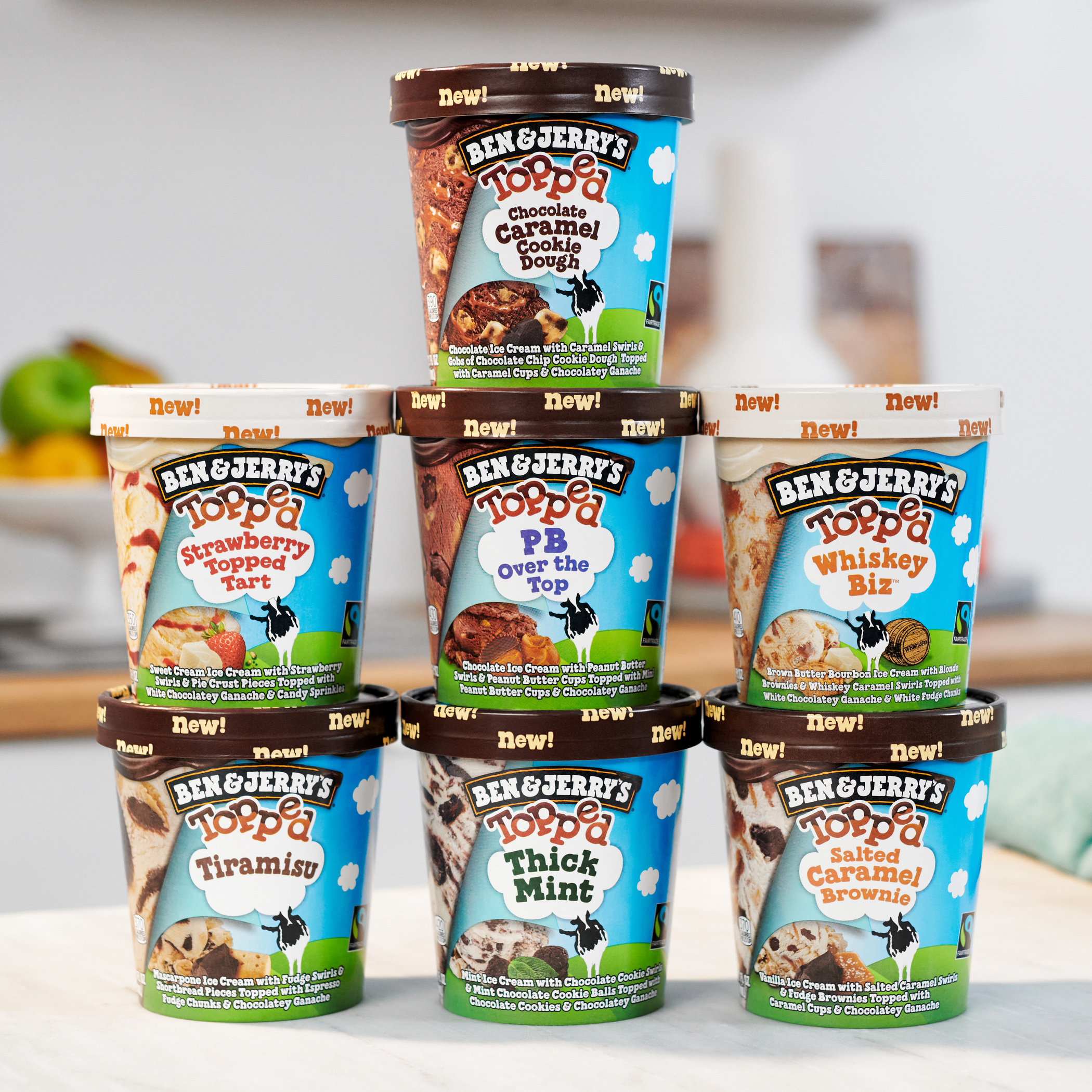 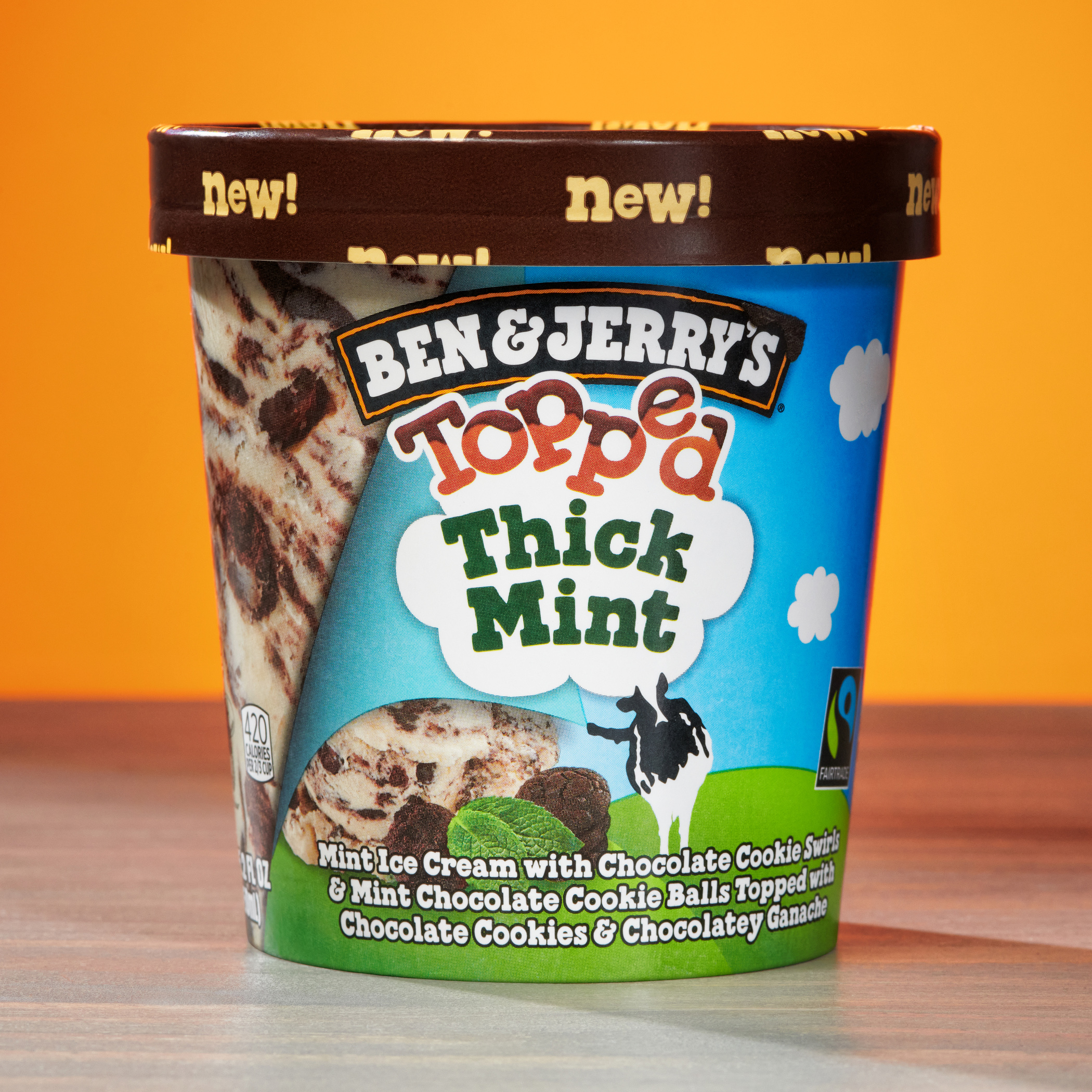 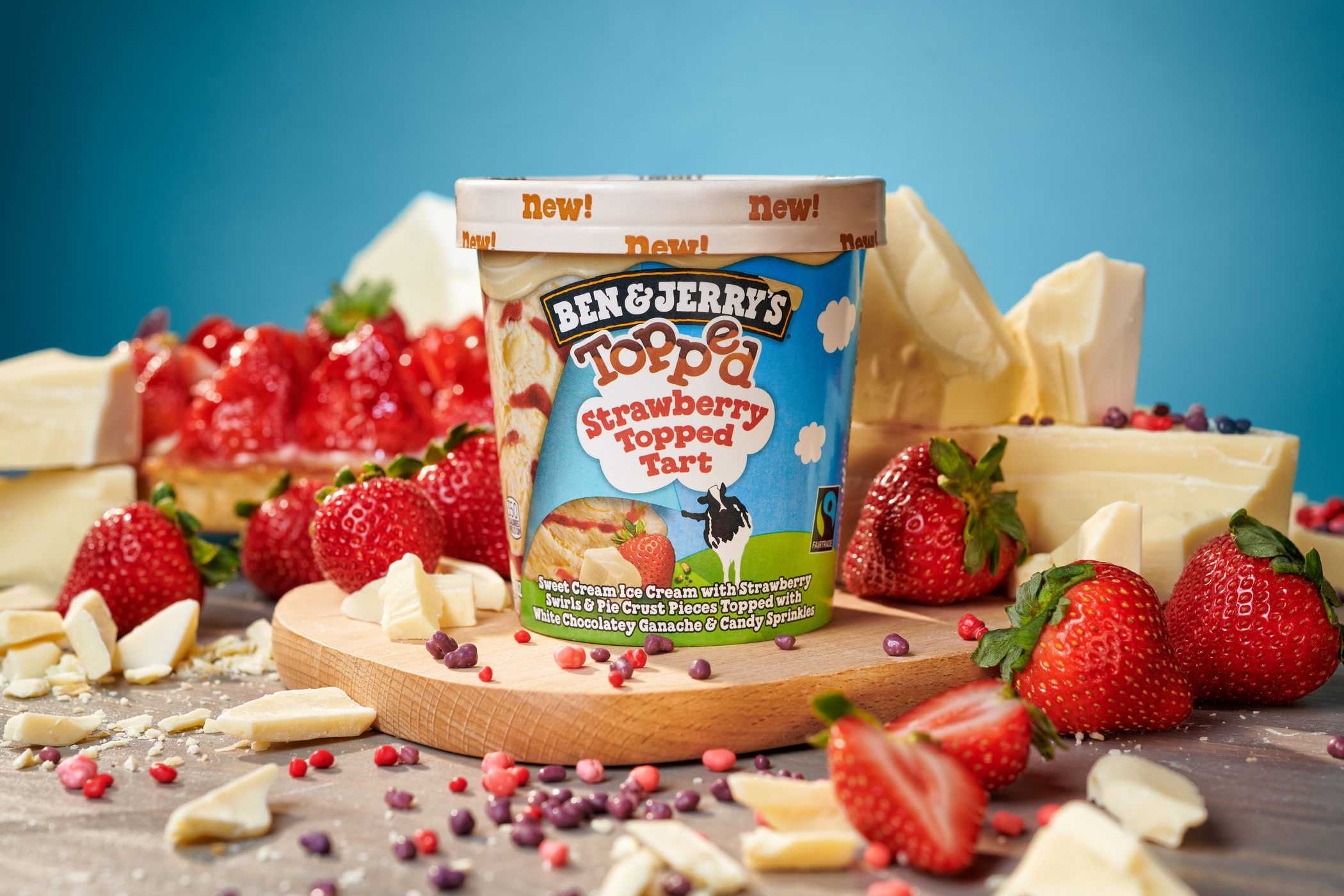 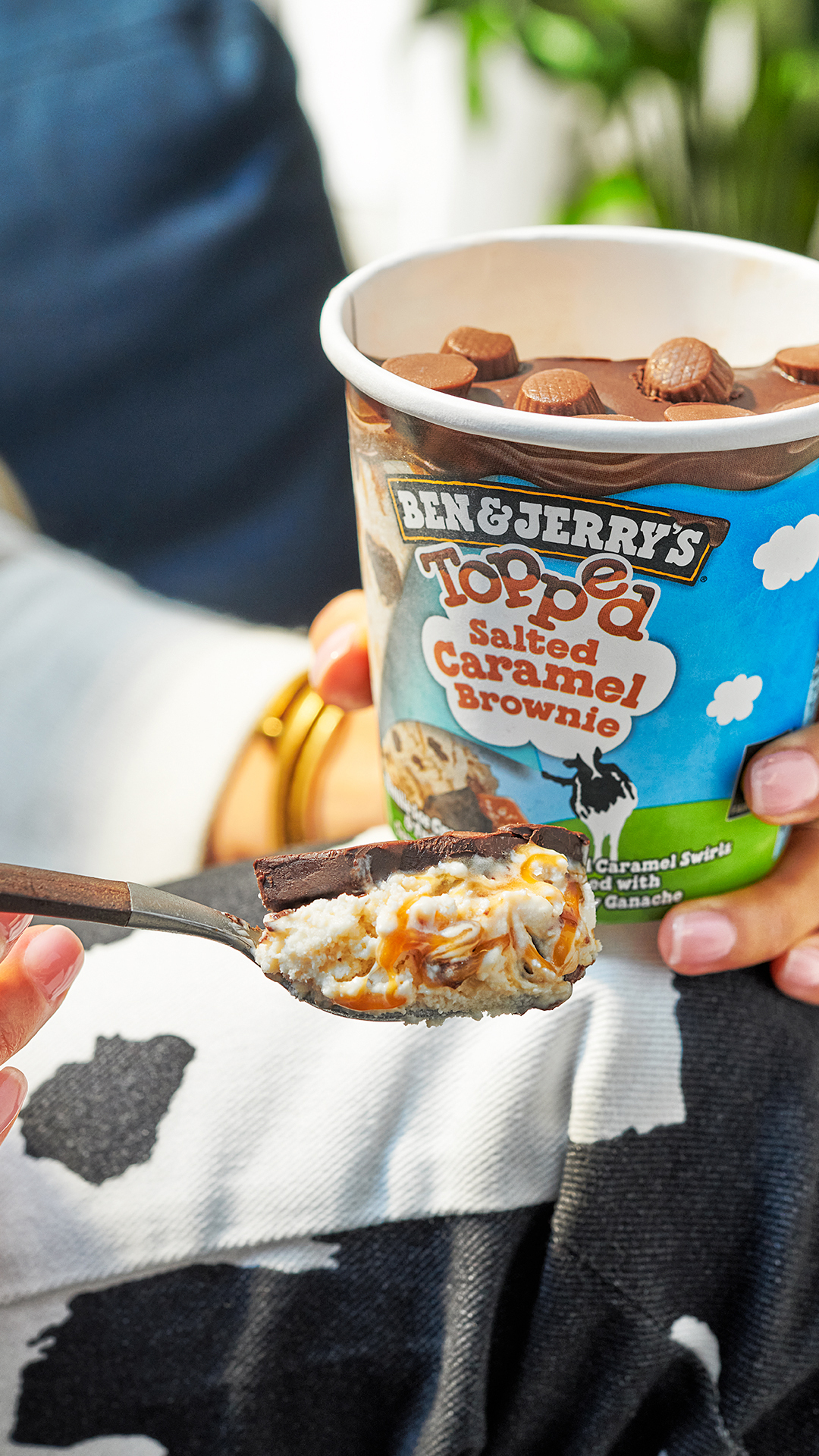 There's a Topped flavor for every fan — whether your jam is fruit, peanut butter, caramel or mint – and each is perfectly paired with a generous and luxurious layer of chocolatey ganache on top. Whiskey Biz™, for example, is a brown butter bourbon ice cream with blonde brownies and whiskey caramel swirls topped with white chocolatey ganache and white fudge chunks. This over-the-top flavor is produced in partnership with Vermont spirit sensation WhistlePig Whiskey, proudly featuring their award-winning 6 year whiskey, WhistlePig PiggyBack Rye, cooked into the caramel swirls.

And that's just the tip-top of the flavor iceberg. The remaining six flavors are:

"We wanted to dial up the indulgence level with this unique line of flavors, which entirely challenges HOW you eat this ice cream," said Dena Wimette, Ben & Jerry's Innovation Guru. "We started with sundaes and all the things you add to sundaes to make them great as our inspiration. You could say we ended up going over the Topped."

Eating a Topped flavor is an exercise in personalization and precision. Should you scrape off the layer of semi-soft, chocolatey ganache before going any further? Tunnel down and eat the ice cream first? Or get the best of all worlds by removing the lid and eating the flavor vertically with delicious ganache, chunks and ice cream all in one beautifully balanced bite? Whatever method you choose you can't lose, so go ahead. This is a judgment free zone.

Topped flavors are available now at retailers nationwide with a suggested retail price of $4.99-5.49. Learn more at benjerry.com.

About Ben & Jerry's As an aspiring social justice company, Ben & Jerry's believes in a greater calling than simply making a profit for selling its goods. The company produces a wide variety of super-premium ice cream, yogurt and sorbet using high-quality ingredients. Ben & Jerry's incorporates its vision of Linked Prosperity into its business practices in a number of ways including a focus on values-led sourcing. In 2015 the company completed its transition to using entirely non-GMO (genetically modified organisms) ingredients by source as well as to fully source Fairtrade-certified ingredients wherever possible, which benefits farmers in developing countries. Ben & Jerry's products are distributed in 35 countries in supermarkets, grocery stores, convenience stores, franchise Ben & Jerry's Scoop Shops, restaurants and other venues. Ben & Jerry's, a Vermont corporation and wholly owned subsidiary of Unilever, operates its business on a three-part Mission Statement emphasizing product quality, economic reward and a commitment to the community. Ben & Jerry's became a certified B Corp in 2012. The Ben & Jerry's Foundation granted $3.4MM in 2020 to support grassroots organizing for social and environmental justice around the country. The Foundation's philanthropy is guided by Ben & Jerry's employees who serve on committees that review applications.