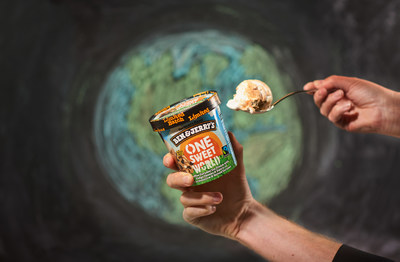 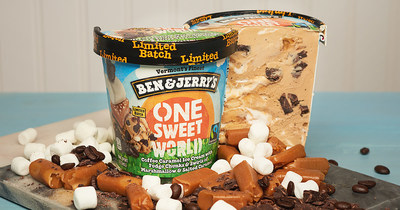 This euphoric pint is filled with more than just chunks and swirls – it's a small part of Ben & Jerry's larger effort to advance issues of social and economic justice. "We believe that when people come together, particularity in this time of racial, economic and political divisions, we can create a more just, equitable, and yes, even a little bit sweeter world," said Ben & Jerry's CEO Jostein Solheim.

From LGBTQ rights and marriage equality, to Occupy Wall Street, Ben & Jerry's has used the power of its business to motivate fans and promote policies that advance the cause of social justice. This commitment is as strong today as it has ever been. As part of that commitment, Ben & Jerry's will donate a portion of the sales of One Sweet World to support those working at the intersection of economic and racial justice.

For more information on One Sweet World, visit Benjerry.com/onesweetworld.

About Ben & Jerry's As an aspiring social justice company, Ben & Jerry's believes in a greater calling than simply making a profit for selling its goods. The company produces a wide variety of super-premium ice cream, yogurt and sorbet using high-quality ingredients. Ben & Jerry's incorporates its vision of Linked Prosperity into its business practices in a number of ways, including a focus on values-led sourcing. In 2015 the company completed its transition to using entirely non-GMO (genetically modified organisms) ingredients by source as well as to fully source Fairtrade-certified ingredients wherever possible, which benefits farmers in developing countries. Ben and Jerry's products are distributed in 35 countries in supermarkets, grocery stores, convenience stores, franchise Ben & Jerry's Scoop Shops, restaurants and other venues. Ben & Jerry's, a Vermont corporation and wholly-owned subsidiary of Unilever, operates its business on a three-part Mission Statement emphasizing product quality, economic reward and a commitment to the community. Ben & Jerry's became a certified B Corp (Benefit Corporation) in 2012. The Ben & Jerry's Foundation's employee-led grant programs totaled $2.5MM in 2016 to support grassroots organizing for social and environmental justice around the country.

For the inside scoop on Ben & Jerry's visit www.benjerry.com.