ATLANTA, April 4, 2019 /PRNewswire/ -- Booksmart Director, actress, activist and celebrity ambassador for Coca-Cola Regal Films program, Olivia Wilde, announced this morning via social media the 2019 winners for the student film program.  The winning team Shayain Lakhani (producer) and Devon Solwold (director) from Savannah College of Art and Design (SCAD) will make their debut at Cinemacon in Las Vegas today alongside Wilde and their 30-second film Choose Happy, which will be shown exclusively at Regal theatres across the country starting in May this summer. 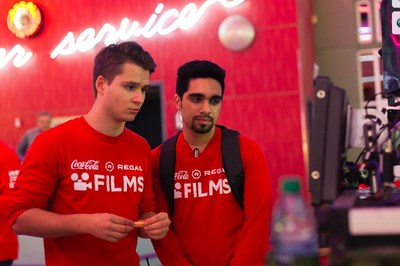 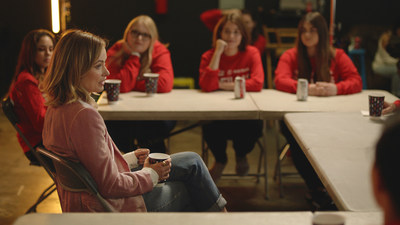 The Coca-Cola Regal Films program partnered with Wilde to serve as a mentor for the program and be part of the Red Ribbon Panel of film industry judges to help choose the winning film.

"I've been so impressed with all the finalist films and it's been incredible to see what they've been able to create," said Olivia Wilde. "This program really gives young filmmakers the opportunity to get noticed in front of a large audience and the ability to leverage industry contacts, which is so important when you're first starting out."  She added, "Choose Happy is a celebration of cinematic ambition, of truly taking advantage of the medium and exploring new ways to illustrate our imagination."

"Olivia Wilde has been an incredible mentor for the program and her genuine enthusiasm and support for these young filmmakers is remarkable," said Ken Thewes, Chief Marketing Officer at Regal. "This is always a highlight of our year to present these students to the film and exhibitor industry and get a taste of Hollywood.  We always receive such a wonderful response from our moviegoers who get to see their short spots on the big screen."

Students from 30 of the most diverse college and university film schools across the country participated in the 2019 Coca-Cola Regal Films program and five advanced to this year's finals. The finalists received $15,000 each to create and produce a 30-second film. In addition to funding, finalists were flown to Los Angeles for a training session and program kickoff event where they learned some tricks of the trade. At the training session, Olivia Wilde met with the students to provide mentoring insights and answer questions about her career. During production, each finalist had access to a Regal location, RED DSMC2 DRAGON-X camera kit and ZEISS cinema lenses free-of-charge, to produce his or her film. During post production, they were given access to Deluxe's EFILM to color finish their spots with some of the industry's top colorists. The grand-prize winning film will debut at Regal theatres nationwide. In addition, they will receive a RED DSMC2 DRAGON-X camera kit and ZEISS cinema lenses to further their careers.

"Once again we have an amazing group of finalists and wonderful films. We're so proud of our partnership with Regal on this work and how it helps us all support the future of filmmaking for the big screen," said Krista Schulte, SVP Coca-Cola North America Strategic Partnership Marketing.

The finalists' films are available to watch online at CocaColaRegalFilms.com.

The winning film and filmmakers are the following:

About Booksmart:Annapurna Pictures' Booksmart is Olivia Wilde's feature film directorial debut which will be released nationwide by United Artists Releasing on May 24th.  The film is an unfiltered comedy about high school friendships and the bonds that last a lifetime.  Booksmart is told from a wildly original, fresh and modern perspective, capturing the spirit of our times; it is a coming of age story for a new generation. Earlier this year, Wilde was named one of Variety's 10 Directors to Watch in 2019, and Booksmart was one of the first feature films in 2018 to receive the Women in Film ReFrame accreditation.  The ReFrame Stamp serves as a mark of distinction for projects that have demonstrated success in gender-balanced films.

About Regal:                                                 Regal, a subsidiary of the Cineworld Group, operates one of the largest and most geographically diverse theatre circuits in the United States, consisting of 7,216 screens in 551 theatres in 43 states along with American Samoa, the District of Columbia, Guam and Saipan as of March 31, 2019. We believe that the size, reach and quality of the Company's theatre circuit provides its patrons with a convenient and enjoyable movie-going experience. We are committed to being "The Best Place to Watch a Movie!" Additional information is available on Regal's website at www.REGmovies.com.

About EFILM | DeluxeColor artistry and groundbreaking technology come together at Deluxe's EFILM -- where the industry's top filmmakers and up-and-comers have come for three decades. Home to world-class talent and recognized with an Academy Award for Scientific and Technical Achievement, EFILM continually sets creative and technology standards in digital color and finishing for features, episodics and trailers. It also provides location services through custom configured technology solutions and highly skilled field technicians. Part of the Deluxe Creative group of companies, EFILM is able to provide its creative services locally in Hollywood, and via real-time, calibrated color grading sessions between EFILM and Deluxe locations anywhere in the world. www.EFILM.com