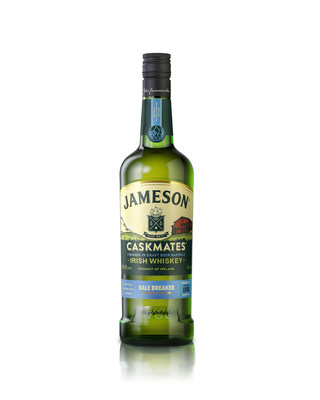 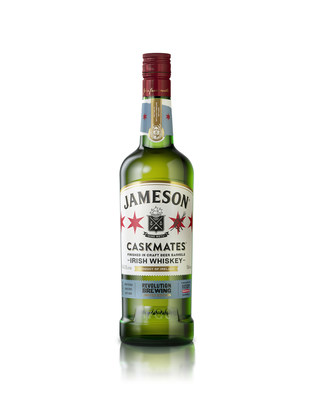 As a brand that grew up in neighborhoods across the country, Jameson has always celebrated the unique places, sounds, and tastes found only in those neighborhoods. The partnership with Bale Breaker Brewing Company and Revolution Brewing has been taken to new heights with the launch of the two Jameson Caskmates Limited Editions.

"Jameson's commitment to local neighborhoods is the cornerstone of our connection with whiskey drinkers and local tastemakers, across the country. Having the opportunity to highlight a shared passion for artistry, with two breweries that have been a part of the Jameson family since the inception of Drinking Buddies program in 2015, is a great feat for everyone involved," said Paul Di Vito, Vice President, Jameson Irish Whiskey, Pernod Ricard USA. "Jameson Caskmates Hyperlocal Editions allow us to put the spotlight on these local breweries, devising a spirit that embodies the taste of our neighborhoods."

"Going to Ireland to collaborate with Jameson is a brewer's dream. Our Topcutter IPA embodies where we're from, and bringing a taste of our neighborhood to the Jameson distillery to create our very own Caskmates Limited Edition was quite incredible," said Kevin Smith, the head brewer at Bale Breaker Brewery.

"When we came together, it was about making something new and different. Chicago has a strong Irish history and now we have an Irish Whiskey of our own," said Jim Cibak, the head brewer at Revolution Brewing.

The Jameson Caskmates series was born from a bar top conversation, touting the evolution of beer and whiskey's role at the bar. For years, the two have coexisted on menus and shelves, but not under one cap until the launch of Jameson Caskmates in 2015. When Jameson Caskmates' was thought up, no one anticipated such an exceptional result, confirming that it couldn't be stopped at just one.

Both, Caskmates Editions should be served neat, on the rocks or alongside a craft beer, we recommend Topcutter IPA or Fist City Pale Ale.

Follow along at @Jameson_US and JamesonWhiskey.com for the latest happenings or to find out more about Jameson Caskmates.

Pernod Ricard USA is headquartered in New York, New York, and has more than 700 employees across the country. As "creators of conviviality," we are committed to sustainable and responsible business practices in service of our customers, consumers, employees and the planet. Pernod Ricard USA urges all adults to consume its products responsibly and has an active program to promote responsible drinking. For more information on this, please visit: www.responsibility.org.

About Bale Breaker Brewing Co.Bale Breaker focuses on handcrafted hop-forward ales, showcasing Yakima Valley hops and celebrating Yakima's status as one of the leading hop growing regions, in the world. Backed by four generations of hop farming experience and a taproom surrounded by hop vines, Bale Breaker started in 2013, and has grown to become the fourth largest independent craft brewery in Washington State.

About Revolution BrewingRevolution Brewing started in 2010 as a Brewpub in the Logan Square neighborhood of Chicago. Today, it's the largest independently owned brewery in Illinois, brewing every drop in Chicago between the original brewpub space in and a production brewery and taproom in Avondale.

Absolut Invites Coachella Fans to Meet in the Metaverse with the...