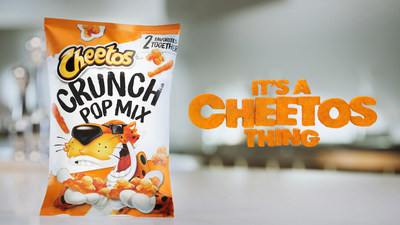 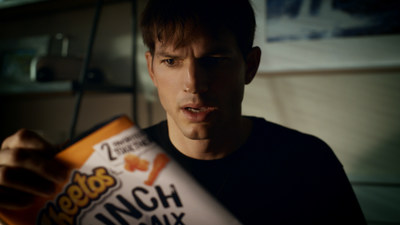 Today, fans can get a preview of the Super Bowl ad in a teaser that features actor, venture capitalist and philanthropist Ashton Kutcher, who discovers some shocking evidence — mysteriously tied to Cheetos Crunch Pop Mix. So what will Ashton do with this Cheetle-coated evidence? And what other celebrity star power will he bring into his dramatic — yet mischievous — story? Fans will have to wait until Super Bowl Sunday for the big reveal but can view this teaser today on Cheetos' social channels [see here].

Cheetos Crunch Pop Mix is so popular, it's sure to be the most coveted snack this game day. In fact, the excitement surrounding the new snack mix has inspired Chester Cheetah to issue a mock advisory warning that the new product is so tantalizingly delicious, fans are likely to sneak a few bites from another family member's stash.

Chester even rolled out a survey to back his theory: According to a recent consumer survey commissioned by Cheetos, nearly half of Americans (48%) admit to sneaking snacks from friends or loved ones, and among those, one in four (25%) even admit to doing it with some regularity*.

"Following the success of Cheetos' big return to the Super Bowl last year with our biggest innovation in a decade in Cheetos Popcorn, we had to dial up both our product and Super Bowl campaigns this time around," said Rachel Ferdinando, SVP and Chief Marketing Officer, Frito-Lay North America. "I humbly believe we've accomplished that with new Cheetos Crunch Pop Mix, bringing fans their two most beloved flavors in Cheetos Popcorn with Cheetos Crunchy. And we're bringing it to the biggest stage with the help of the multi-talented Ashton Kutcher, who we're thrilled and honored to work with."

It's a Cheetos Thing

Cheetos is one of the many brands that make up Frito-Lay North America, the $17 billion convenient foods division of PepsiCo, Inc. (Nasdaq: PEP), which is headquartered in Purchase, NY. Learn more about Frito-Lay at the corporate website, http://www.fritolay.com/, the Snack Chat blog, http://www.snacks.com/ and on Twitter http://www.twitter.com/fritolay.

PepsiCo products are enjoyed by consumers more than one billion times a day in more than 200 countries and territories around the world. PepsiCo generated more than $67 billion in net revenue in 2019, driven by a complementary food and beverage portfolio that includes Frito-Lay, Gatorade, Pepsi-Cola, Quaker and Tropicana. PepsiCo's product portfolio includes a wide range of enjoyable foods and beverages, including 23 brands that generate more than $1 billion each in estimated annual retail sales.

Guiding PepsiCo is our vision to Be the Global Leader in Convenient Foods and Beverages by Winning with Purpose. "Winning with Purpose" reflects our ambition to win sustainably in the marketplace and embed purpose into all aspects of the business.  For more information, visit www.pepsico.com.

Frito-Lay® Launches Industrially Compostable Bags with Off The...