EAST HANOVER, N.J., May 11, 2020 /PRNewswire/ -- As many high schools have closed their physical doors for the rest of the school year, the CHIPS AHOY! and the SOUR PATCH KIDS brands are dusting off their tuxes and planning the perfect updo for the Sweetest Prom Ever! 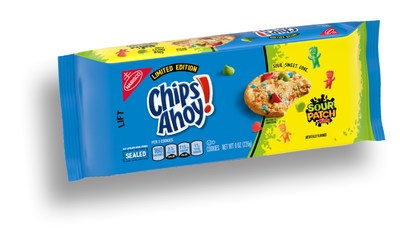 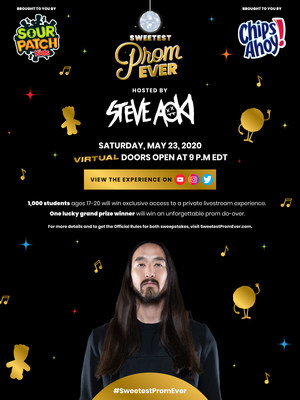 The two brands recently teamed up to drop the tastiest collaboration of the year – CHIPS AHOY! SOUR PATCH KIDS Inspired Limited Edition Cookies! – and are coming together once again to spark a little happiness. On Saturday, May 23, the brands are teaming up with world-renowned producer/DJ, Steve Aoki, to host a virtual prom party – and this is their official promposal to students around the country. The best part? No limo is required to get to this party!

The Sweetest Prom Ever virtual party will kick off at 9 p.m. EDT and stream live on Steve Aoki's YouTube channel, as well as the CHIPS AHOY! and SOUR PATCH KIDS YouTube, Instagram and Twitter channels, until 9:45 p.m. EDT featuring an exclusive virtual DJ set by Steve Aoki. Teens are encouraged – but not required – to dress up for this special digital occasion.

"Prom is an important milestone for so many teens, and we know this year looks different for everyone," said Sabrina Sierant, associate director, Chips Ahoy! at Mondelēz International. "We're excited for Chip and The Kids to connect students around the country with a little bit of music and some prom magic! Our goal is to inspire everyone to make their own sweet prom memories from the comfort of home."

In true SOUR PATCH KIDS fashion, the Kids have some sweet surprises and together with Chip, they're giving 1,000 students ages 17-20 a chance to win exclusive access to experience the virtual prom party through an interactive viewing platform by entering the Sweetest Prom Ever Sweepstakes at SweetestPromEver.com.

But that's not all! One lucky student between 17-20 years old will take home the grand prize: an unforgettable prom do-over event for their classmates. To win, they must share a promposal on Instagram or Twitter, follow @ChipsAhoy and @SourPatchKids on that social platform, and include @ChipsAhoy, @SourPatchKids, #SweetestPromEver and #Sweepstakes in their caption. The deadline to enter for the chance to win one of the 1,000 spots in the virtual party and the grand prize do-over event is Saturday, May 16 at 11:59 p.m. ET. Anyone under 18 needs parental consent to enter.

"I can't imagine what students are going through right now, so I hope that the Sweetest Prom Ever virtual party can give them something to get excited about," said Steve Aoki. "Music is a great way to bring people together during tough times and I'm stoked to partner with CHIPS AHOY! and SOUR PATCH KIDS to bring high schoolers an epic night they won't forget."

To get the Official Rules and to learn more about how to participate in the sweepstakes to win premium access to the virtual prom party or to win the prom do-over, head to SweetestPromEver.com.

About Mondelēz InternationalMondelēz International, Inc. (NASDAQ: MDLZ) empowers people to snack right in over 150 countries around the world. With 2019 net revenues of approximately $26 billion, MDLZ is leading the future of snacking with iconic global and local brands such as OREO, belVita and LU biscuits; Cadbury Dairy Milk, Milka and Toblerone chocolate; Sour Patch Kids candy and Trident gum. Mondelēz International is a proud member of the Standard and Poor's 500, Nasdaq 100 and Dow Jones Sustainability Index. Visit www.mondelezinternational.com or follow the company on Twitter at www.twitter.com/MDLZ.

About Steve AokiSteve Aoki, the two-time Grammy-nominated producer/DJ is one of today's most successful American cross-genre artists, collectively counting 2.8 billion music streams on Spotify. As the founder of the trendsetting record label, events/lifestyle company, and apparel line Dim Mak Records, which he founded in 1996, Aoki has helped launch the careers of global acts like The Chainsmokers, Bloc Party, The Bloody Beetroots, The Gossip, and The Kills, among many others. Dim Mak today counts more than 1,000 official releases from the biggest acts and most buzzing newcomers across EDM, indie rock, hip-hop and beyond over its two-decades-plus discography. As a solo artist, Aoki boasts a lauded discography that includes: Wonderland (2012), his debut solo album, which garnered him his first-ever Grammy nomination for Best Dance/Electronica Album; hip-hop centric Kolony (2017), and the Neon Future series, which includes Neon Future I (2014, certified gold by the RIAA), Neon Future II (2015), Neon Future III (2018) and the recently released Neon Future IV (April 2020); which has  rocketed in streaming to date and received praise from singles such as "Maldad" ft. Maluma and "Let It Be Me" ft. Backstreet Boys. Recognized by Forbes as one of the top 5 world's highest paid DJ's and the world's hardest working DJ, Aoki is "one of the most in-demand entertainers in the world" (Billboard), counting more than 250 tour dates per year. In 2012, Aoki founded THE AOKI FOUNDATION, which primarily supports organizations in the brain science and research areas with a specific focus on regenerative medicine and brain preservation. Most recently, Steve Aoki released his critically acclaimed memoir entitled BLUE: The Color of Noise published by St. Martin's Press.

Chips Ahoy! Cookies Teams Up With "America's Got Talent" To Debut ...