LEBANON, Tenn., Dec. 6, 2021 /PRNewswire/ -- Care is in the air this holiday season as Cracker Barrel Old Country Store® announced today it will present "Sounds of the Season: Together Again," a holiday special with songs and conversations from three-time GRAMMY® Award-winning and multi-platinum-selling artist Pentatonix and country music star Mickey Guyton. The artists will showcase Christmas songs with their own unique take, while sharing their favorite holiday traditions and creating new memories around the table. The 30-minute holiday feature, including new and timeless songs such as "Have Yourself a Merry Little Christmas," "Evergreen," "O Holy Night," "How Great Thou Art" and more, will be available to stream on Cracker Barrel's YouTube and Facebook channels starting Dec. 15. 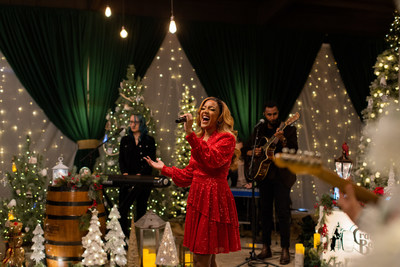 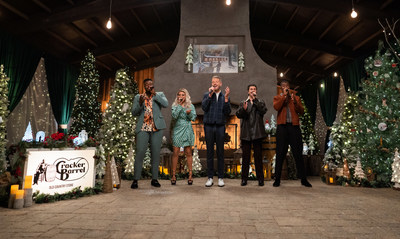 At Cracker Barrel, the spirit of the holiday season is rooted in music and bringing everyone together at the table. This year, the brand is using music to celebrate the traditions we share and those that make us unique with the help of Pentatonix and Mickey Guyton. All with various backgrounds and upbringings, these artists will inspire viewers to not only reflect on their own holiday traditions, but also to learn from one another throughout the Christmas season and beyond.

"As friends and families reunite this year after spending recent holidays apart, we are excited to celebrate the season through music with Cracker Barrel's second edition of 'Sounds of the Season: Together Again,'" Cracker Barrel Senior Vice President and Chief Marketing Officer Jennifer Tate said. "We hope the songs, new and old, as well as the meaningful discussions Pentatonix and Mickey have in this year's holiday special inspire viewers to consider how they can welcome a diverse range of people, thoughts and traditions to their table this holiday season."

"The holiday season is our favorite time of year! It was extra special this year because we got to collaborate with Mickey and remake 'How Great Thou Art.' It was also so meaningful to be able to bond and share our favorite holiday rituals with her," Scott Hoying from Pentatonix said. "Coming off of the release of our new holiday album, 'Evergreen,' we're thrilled to keep sharing in the joy of the season alongside Cracker Barrel as they leverage the power of diverse voices in music to represent the joy found in the holidays year-round."

"I'm so excited to join Cracker Barrel in spreading holiday cheer and care this holiday season," Mickey Guyton said. "The holiday season is a special time for families across the country to celebrate together. While we all have our own traditions, it's been inspiring to come together with Pentatonix to celebrate our unique takes on these holiday favorites."

About Mickey GuytonCapitol Nashville's Mickey Guyton "raises the rafters and distills emotion with impeccable clarity. Her high notes thrill, her nuance in storytelling captivates. A star for our times claims her place," (NPR). Guyton recently released her critically acclaimed debut album Remember Her Name which was hailed by the Associated Press as "a powerful and personal debut" and Slate as a "scorching reclamation of a genre."

Mickey co-wrote 15 of the 16 songs on the album and describes Remember Her Name as "a culmination of the last 10 years of my life in Nashville. All those years ago, I set out to create music that would make people feel self-empowered, loved and comfortable with being themselves, and this album holds true to all of that. I hope everyone who listens finds something that connects and speaks to them."

With Remember Her Name, Mickey made history as the first Black artist to earn a GRAMMY nomination for Best Country Album. Title track "Remember Her Name" also landed Mickey with GRAMMY nominations for Best Country Song and Best Country Solo Performance. This follows last year's groundbreaking GRAMMY nomination as the first-ever Black female solo artist to earn a nod in a country category (Best Country Solo Performance) for "Black Like Me" which she performed as part of the awards ceremony. "Black Like Me" was named one of the Top 10 all-genre songs of 2020 by NPR, Billboard and Associated Press. She also co-hosted the 56th Academy of Country Music Awards on CBS along with Keith Urban and she was recently named CMT's Breakout Artist of the Year.

Mickey and her music have been featured on the cover of Billboard and profiled in The New Yorker, The New York Times, Rolling Stone and many more.

About PentatonixThree-time GRAMMY® Award-winning and multi-platinum-selling artist Pentatonix has sold more than 10 million albums worldwide and performed for hundreds of thousands of fans at their sold out shows across the globe. Their YouTube channel boasts over 19 million subscribers, yielding more than 5 billion video views.

Pentatonix has had two #1 albums on Billboard's Top 200 Chart - 2015's gold-certified self-titled album and the 2x platinum That's Christmas To Me. The group has received multiple RIAA certifications for multi-platinum-, platinum- and gold-selling albums and singles, a Daytime Emmy nomination, starred in three holiday specials on NBC and appeared in the feature film "Pitch Perfect 2."

Last summer, Pentatonix released their At Home EP, which featured new arrangements of "Blinding Lights" (The Weeknd), "when the party's over" (Billie Eilish), "Break My Heart" (Dua Lipa) and "Dreams" (The Cranberries), before releasing two original songs, "Happy Now" and "Be My Eyes" (from their album, The Lucky Ones), as well as an arrangement and video for Tears for Fears' "Mad World."  The quintet also celebrated the end of 2020 with a new holiday collection, We Need A Little Christmas, a performance at Macy's Thanksgiving Day Parade and NBC's New Year's Eve broadcast. Pentatonix released their new original album, The Lucky Ones, in February of 2021 and The Lucky Ones Deluxe in September of 2021. Most recently, the group released their 2021 holiday album, Evergreen. The band will kick off their 16-date Pentatonix: The Evergreen Christmas Tour 2021 on Nov. 27, 2021.