PLAINFIELD, Ill., Aug. 1, 2017 /PRNewswire/ -- On July 29, Diageo's Plainfield, Illinois facility celebrated its 50th anniversary with a festival for its employees and families and a ceremony attended by several government officials.

Representative Randy Hultgren, representing the 14th District of Illinois, attended the 50th anniversary celebration and presented to the facility a flag that was flown over the United States Capitol in honor of Diageo Plainfield's 50th anniversary, and will now be raised at the Plainfield Facility. 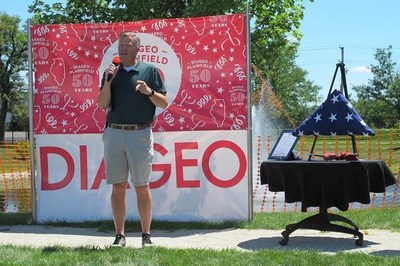 Diageo's Plainfield facility has also been honored by Michael Collins, Mayor of Plainfield Village, and Village Trustees, with a proclamation naming September 29, 2017 as "Diageo Day" in the village of Plainfield.

Plainfield is the on Diageo location in the world that houses both a technical center and a full, state-of-the-art production facility.  The Plainfield plant plays an important role in bringing many of the most famous brands to the world, including Smirnoff, Gordon's, Captain Morgan, Seagram's, Rumple Minze, Bulleit, Yukon Jack, Crown Royal, Myers's, George Dickel, Jeremiah Weed and many more.

Diageo is a global leader in beverage alcohol with an outstanding collection of brands across spirits, beer and wine categories. These brands include Johnnie Walker, Crown Royal, J&B, Buchanan's and Windsor whiskies, Smirnoff, Cîroc and Ketel One vodkas, Captain Morgan, Baileys, Don Julio, Tanqueray and Guinness.

Diageo is a global company, and our products are sold in more than 180 countries around the world. The company is listed on both the London Stock Exchange (DGE) and the New York Stock Exchange (DEO). For more information about Diageo, our people, our brands, and performance, visit us at www.diageo.com. Visit Diageo's global responsible drinking resource, www.DRINKiQ.com, for information, initiatives, and ways to share best practice.