Regarding the return of populism and the increased demise in legitimacy of many democratic governments throughout the region, Gutiérrez pointed out: "It is true that the elites of Latin America have fell short and are not up to the task. They confused freedom and democracy with privileges when in reality they are rights and responsibilities that must be fought for every day ".

In relation to the recent outbreak of demonstrations in Colombia, former President Pastrana declared: "We have to be careful with these kinds of claims that democracy is not working. If we review Colombian democracy and the numbers, we see economic growth, improvements in education, health and living. There are many things that have been working. Unfortunately today we have a pandemic and that has taken us back 10 or more years and we have to work together. But democracy has worked ".

Gutiérrez added: "The populist madness of the radical left, empowered by the corruption of the incompetent right, is the greatest threat that freedom and democracy face in Latin America today".

In turn, Pastrana pointed out the intentions to destabilize the region with Colombia as its main objective: "Look what happened in Chile in 2019 with the increase in the subway rate. Here's an organized attack. When these left-wing governments were in power, they had the greatest amount of money, but the living conditions of the poorest people were not improved, resources were lost in an absolute corruption, never seen before in the region. Colombia is definitely at risk of falling".

Gutiérrez concluded the meeting by saying: "If Latin America has any challenge today, it is to ensure that the ideas of Liberty, Justice and republican democracy do not end up in the cemetery of forgotten ideas". 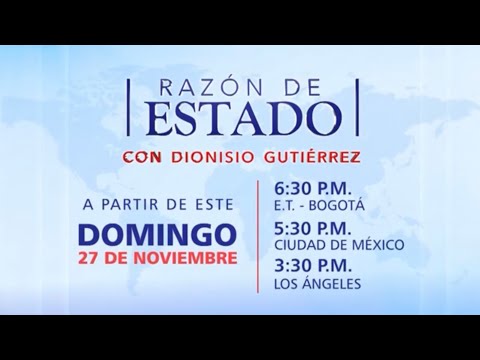