ANN ARBOR, Mich., March 2, 2015 /PRNewswire/ -- Domino's Pizza (NYSE: DPZ), the recognized world leader in pizza delivery, is giving customers yet another new way to place their order, all from the convenience of their own wrist. Domino's customers can now place and track their order via Pebble and Android Wear smartwatches. 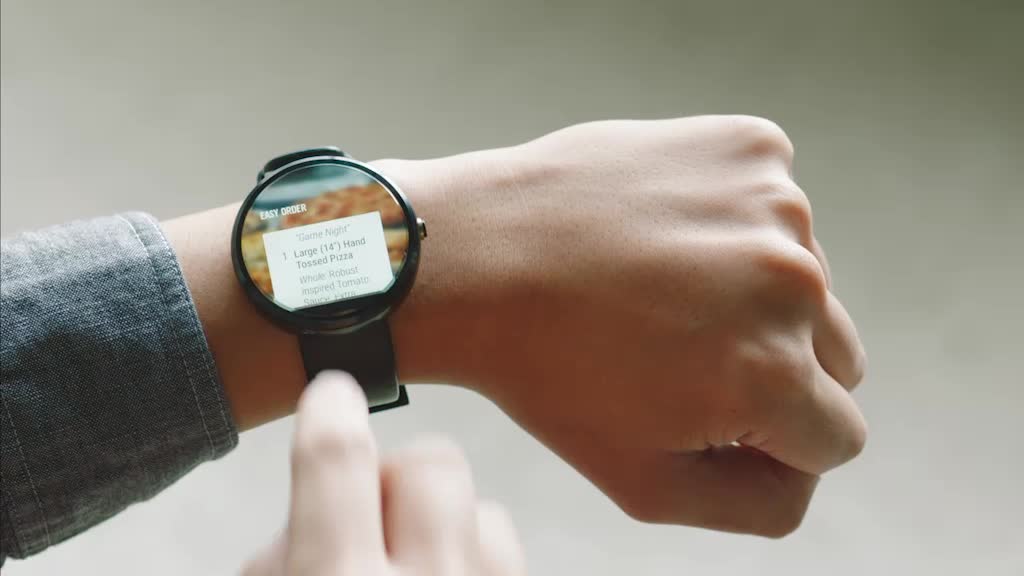 This marks the first time that Domino's ordering is available on smartwatch technology. To utilize this new ordering feature, Pebble and Android Wear smartwatch users must have Domino's app for their smartwatch, along with a Pizza Profile with a saved Easy Order™ or recent order.

Customers can also use the fan-favorite Domino's Tracker® on their smartwatch to follow the progress of their order, from the time it is taken, to when it is placed in the oven, and ready for delivery or carryout.

"Pairing Domino's with smartwatch technology couldn't be more of a natural fit," said Kevin Vasconi, Domino's Pizza chief information officer. "We are constantly looking for ways to use technology to enhance our customers' experience and provide them with more convenience. We pride ourselves on having a variety of online ordering options for customers to choose from."

Ordering on Pebble and Android Wear smartwatches is the first of this year's Easy Order™ innovations and joins Domino's extensive list of digital ordering options. Customers may order via iPad®, iPhone®, Android™, Windows Phone 8®, and Kindle Fire™ ordering apps or via www.dominos.com.

Founded in 1960, Domino's Pizza is the recognized world leader in pizza delivery, with a significant business in carryout pizza. It ranks among the world's top public restaurant brands with its global enterprise of more than 11,600 stores in over 75 international markets. Domino's had global retail sales of over $8.9 billion in 2014, comprised of more than $4.1 billion in the U.S. and nearly $4.8 billion internationally. In the fourth quarter of 2014, Domino's had global retail sales of over $2.8 billion, comprised of $1.3 billion in the U.S. and $1.5 billion internationally. Its system is made up of franchise owners who accounted for nearly 97% of Domino's Pizza stores as of the fourth quarter of 2014. The emphasis on technology innovation helped Domino's generate approximately 50% of U.S. sales from its digital channels at the end of 2014, and reach an estimated run rate of $4 billion annually in global digital sales. Domino's recently launched its ordering app for iPad®, adding to an existing ordering app lineup that covers nearly 95% of the U.S. smartphone market. In June 2014, Domino's debuted voice ordering for its iPhone® and Android™ apps, a true technology first within both traditional and e-commerce retail.

Pebble is a customizable smartwatch that delivers information from your iOS or Android smartphone right to your wrist. It gives you the information you want when you want it – whether it's checking your messages, seeing how many miles you've run, or changing your music, all without opening your phone. Pebble is lightweight, waterproof, and has a rechargeable battery that lasts up to 7 days. The Pebble appstore has over 6,000 apps that make it more useful and mesh seamlessly with your life. Pebble is based in Palo Alto, California and launched on Kickstarter in 2012. Visit getpebble.com for more details.