ANN ARBOR, Mich., Aug. 20, 2019 /PRNewswire/ -- Domino's Pizza (NYSE: DPZ), the largest pizza company in the world based on global retail sales, has spent years focused on cutting-edge technology created and built largely by teams at its World Resource Center in Ann Arbor. Those cross-functional teams now have a new space called Domino's Innovation Garage where they can collaborate on, create and test new ideas to take the brand to the next level. Domino's Innovation Garage, located at Domino's Farms in Ann Arbor, will celebrate its grand opening on Wednesday, Aug. 21. 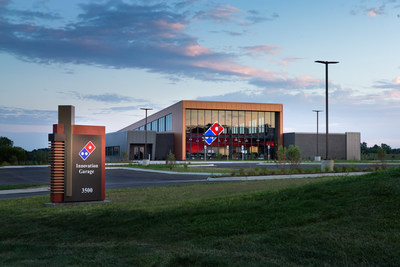 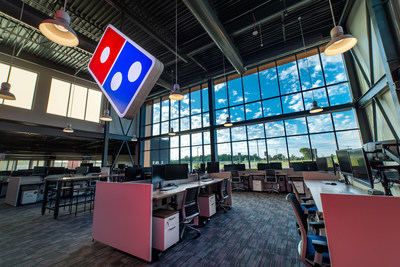 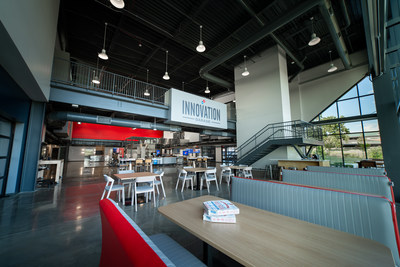 "Domino's Innovation Garage is focused on accelerating Domino's spirit of creativity and collaboration," said Kelly Garcia, Domino's chief technology officer. "As a pizza company with a focus on technology, we want our team members to have a workspace that encourages experimentation and fosters an environment to take risks, test innovations and fail-fast so they can bring their best cutting-edge ideas to life for the brand's customers and stores."

The new 33,000-square-foot, two-story building has an open-concept design space for 150 Domino's team members, collaboration workspaces, private meeting rooms and a fully-functioning pizza theater. Project-based teams will use the pizza theater, which features the next-generation design, to develop and test new technology, such as ordering kiosks and a carryout tracker, in a store setting. Domino's Innovation Garage will also have a dedicated space for testing delivery innovations, including the GPS delivery tracking experience, the customer interface on autonomous pizza delivery vehicles and robots such as Nuro's R2 – an unmanned vehicle that will test pizza deliveries later this year. In addition to future technology, the facility will hold all of Domino's current AnyWare ordering technology, in-store technology and a quality assurance lab for testing pretotypes.

"Having a hub for our community of smart, creative and dynamic team members to develop our brand and take it to the next level is important for our continued success," said Garcia. "We're proud to now have a space dedicated to learning, exploring, testing and launching new ideas in a way that only Domino's can do."

About Domino's Pizza® Founded in 1960, Domino's Pizza is the largest pizza company in the world based on retail sales, with a significant business in both delivery and carryout pizza. It ranks among the world's top public restaurant brands with a global enterprise of more than 16,300 stores in over 85 markets. Domino's had global retail sales of over $13.5 billion in 2018, with nearly $6.6 billion in the U.S. and more than $6.9 billion internationally. In the second quarter of 2019, Domino's had global retail sales of over $3.2 billion, with over $1.6 billion in the U.S. and over $1.6 billion internationally. Its system is comprised of independent franchise owners who accounted for 98% of Domino's stores as of the second quarter of 2019. Emphasis on technology innovation helped Domino's achieve more than half of all global retail sales in 2018 from digital channels. In the U.S., Domino's generates over 65% of sales via digital channels and has developed several innovative ordering platforms, including Google Home, Facebook Messenger, Apple Watch, Amazon Echo and Twitter – as well as Domino's Hotspots®, an ordering platform featuring over 200,000 unique, non-traditional delivery locations. In late 2017, Domino's began an industry-first test of self-driving vehicle delivery, and in June 2019 announced a partnership with Nuro, furthering its exploration and testing of autonomous pizza delivery.

Domino's® and the National Fire Protection Association Team Up to ...