The FAIR Health 80th percentile benchmark for healthcare charges will be used to enable consumers to better understand healthcare costs and insurance benefits when calculating reimbursement for out-of-network healthcare services and will support critical consumer disclosures regarding out-of-pocket costs.

The out-of-network provisions, which take effect March 31, 2015, are intended to clarify what consumers can expect to pay for services received from out-of-network providers by serving as a consistent basis of comparison for required disclosures and examples of insurance terms and providers' fees. Relevant to the implementation of many of the bill's provisions, including those related to dispute resolution, is the concept of "usual and customary cost." That term is defined in the law as the 80th percentile of an independent database maintained by a conflict-free, not-for-profit organization.

Recently released guidance by the New York State Department of Financial Services designates FAIR Health as the approved, independent source for data required to comply with the law. For more information visit www.fairhealthny.org

The new law requires each payer to illustrate the reimbursement provisions of its plan with examples that compare the costs for a consumer under the plan with the reimbursement and out-of-pocket costs based on the FAIR Health 80th percentile of billed charges for a procedure in the consumer's own geographic area.

As a result of the new law, insurers, HMOs, managed care organizations, student health plans and similar organizations have a number of new responsibilities, including complying with guidelines for dispute resolution, fulfilling disclosure requirements, explaining how they calculate out-of-network reimbursement levels and making that cost-calculation explanation available to plan members both in writing and through a website. The statute also provides protections for consumers in the case of emergency services and "surprise bills," – larger than expected bills-- for out-of-network services which an insured reasonably believed were in-network.

"Using our unbiased and robust database, the disclosures and explanations required by the bill will undoubtedly have a profound impact on New York's healthcare system as they provide consumers and other stakeholders a clearer understanding about out-of-pocket costs, provider network status and dispute resolution," said Robin Gelburd, president of FAIR Health.

Founded to bring transparency to healthcare costs, FAIR Health maintains the nation's largest repository of privately-insured claims data. The FAIR Health database currently holds more than 18 billion claims, with a billion new claims received annually from insurance plans that cover more than 150 million individuals throughout the United States. The database now includes more than 1.4 billion claims for services rendered in New York State that are sorted by healthcare service or procedure and organized by 31 specific geographic regions statewide. Benchmarks issued by FAIR Health are based on data that have been validated using statistical methodologies developed by experts.  The volume and breadth of the FAIR Health database with its enormous collection of New York charges, its methodologies, its organization of data to determine charge benchmarks, and transparency of its processes have earned recognition for FAIR Health as an industry leader.

"Designating the use of our data in this important piece of legislation is further testament to its trusted quality," said Gelburd. "FAIR Health's reputation for independence and transparency and the reliability, validity and objectivity of FAIR Health data help explain why the State and other key stakeholders have identified FAIR Health as an approved source of data to support the new legislation." 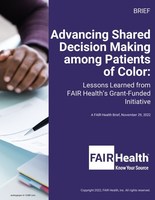 In South and West, COVID-19 Declined among Top Five Telehealth...