ORLANDO, Fla., June 7, 2019 /PRNewswire/ -- Since 1964, the same year SeaWorld first opened its gates, SeaWorld's rescue teams have been on the frontlines of giving ill, injured, orphaned or abandoned animals a second chance at life.  Today, SeaWorld Parks & Entertainment announced that SeaWorld Rescue has now come to the aid of more than 35,000 marine and terrestrial animals in its 55-year history. Trends in rescue data suggest that the impact of human activity on our oceans, such as plastic pollution, is taking an increasing toll on marine wildlife in recent years. 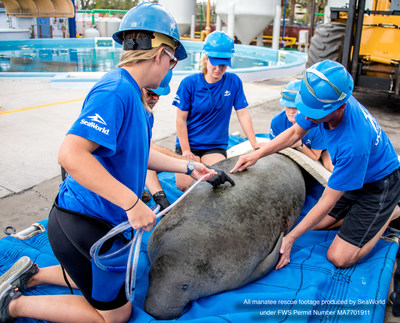 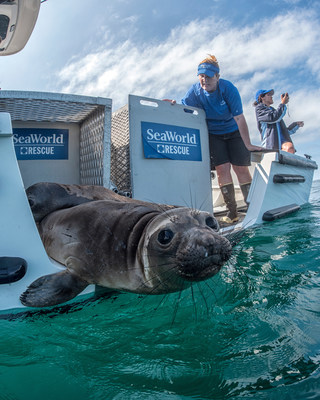 To grow awareness of the threats facing wildlife, the company also launched a new SeaWorld Rescue channel on Instagram ahead of World Oceans Day that tells the story of rescue, rehabilitation and release, as seen through the eyes of those on the frontlines of saving animals.

"As an organization, we want to get to a place where we conduct fewer rescue operations, not more, but right now there are a lot of ill, distressed or stranded wild animals in need," said Jon (JP) Peterson, Senior Leader of Zoological Operations at SeaWorld Orlando, who has personally assisted thousands of distressed animals. "We're not there yet, but there's much more awareness now of the impact that humans are having on the ocean's health and the animals that live in the ocean than there was when I started on the rescue team, and that gives us hope. Part of SeaWorld's mission is to increase awareness and education of the true impact humans are having on our oceans and the detrimental effects on marine wildlife."

SeaWorld cites changes in sea surface temperatures, urban development and resulting habitat loss, along with ocean pollution, as primary causes and concerns impacting marine wildlife. According to SeaWorld Rescue data, for example, approximately half of the manatees rescued along Florida's coast since 2015 were in danger from human-impacted activities, including paralysis caused by cold stress or red tide as seawater temperatures dramatically change with the climate, injuries caused by boat strikes, or entanglement in marine debris.

"The U.S. Fish and Wildlife Service would like to express our sincere gratitude to SeaWorld on behalf of the West Indian manatee on World Oceans Day and every day," said Jay Herrington, field supervisor for U.S.  Fish and Wildlife Service's North Florida Ecological Services Office.  "The rescue team and veterinary staff have always gone above and beyond for these animals, pairing a love for Florida's beloved state marine mammal with a desire to contribute to manatee conservation and recovery. This dedication by the SeaWorld team to help save the species has extended across the Florida border, as they have led manatee rescue operations from Massachusetts to Texas with many other partners in marine conservation."

SeaWorld's rescue team is on call 24/7, 365 days of the year, partnering with multiple government agencies, including the National Oceanic and Atmospheric Administration (NOAA), to rescue and rehabilitate animals, with the ultimate goal of restoring them to full health so they can return to their natural habitat. In cases where a rescued animal is deemed non-releasable by NOAA or another federal agency, however, SeaWorld is one of many facilities on call nation-wide to provide world-class care from its dedicated team of animal specialists and veterinarians.

"SeaWorld has been a long-standing valuable partner in promoting marine conservation, and rescuing and rehabilitating stranded, entangled or imperiled marine wildlife," said Donna Wieting, Director of NOAA Fisheries' Office of Protected Resources. "On World Oceans Day, NOAA and SeaWorld remind the public that they, too, have an important role in reporting stranded or injured marine animals."

In addition to SeaWorld's rescue efforts, the company's team of experienced zoologists and researchers are working on the frontlines of conservation around the globe to help some of the estimated one million species that are being driven toward extinction. From developing new tools at its Species Preservation Laboratory in California to help repopulate threatened species, to conducting critical killer whale research within its parks that aids in the conservation of threatened southern resident killer whales in the Pacific Northwest, to practicing conservation medicine to rehabilitate endangered species like the Guadalupe fur seal, the various species in SeaWorld's care are providing a trove of scientific data that scientists can tap to better diagnose and understand threats to the health of their wild counterparts.

"For SeaWorld, our commitment to conservation runs deeper than saving a single animal on a beach," said Peterson. "We want to save and support their entire species, the ecosystem that they live in, and the food sources that they feed on."

SeaWorld Entertainment, Inc. (NYSE: SEAS) is a leading theme park and entertainment company providing experiences that matter, and inspiring guests to protect animals and the wild wonders of our world. The Company is one of the world's foremost zoological organizations and a global leader in animal welfare, training, husbandry and veterinary care. The Company collectively cares for what it believes is one of the largest zoological collections in the world and has helped lead advances in the care of animals. The Company also rescues and rehabilitates marine and terrestrial animals that are ill, injured, orphaned or abandoned, with the goal of returning them to the wild. The SeaWorld® rescue team has helped more than 35,000 animals in need over the last 55 years.  SeaWorld Entertainment, Inc. owns or licenses a portfolio of recognized brands including SeaWorld, Busch Gardens®, Aquatica®, Sesame Place® and Sea Rescue®. Over its more than 55-year history, the Company has built a diversified portfolio of 12 destination and regional theme parks that are grouped in key markets across the United States, many of which showcase its one-of-a-kind zoological collection. The Company's theme parks feature a diverse array of rides, shows and other attractions with broad demographic appeal which deliver memorable experiences and a strong value proposition for its guests.

Copies of this and other news releases as well as additional information about SeaWorld Entertainment, Inc. can be obtained online at www.seaworldentertainment.com. Shareholders and prospective investors can also register to automatically receive the Company's press releases, SEC filings and other notices by e-mail by registering at that website.

How You Can HelpThe number of animal rescues has increased in recent years in part because more and more people are calling in animal injuries or strandings, enabling the rescue team to respond more quickly and efficiently. If you come across an ill, stranded or injured animal, contact animal rescue teams in the following regions: