LAS VEGAS, Jan. 4, 2017 /PRNewswire/ -- Hisense, the multinational consumer technology manufacturer and one of the largest television brands in the world, took the stage at CES 2017 today, championing the company's continued momentum in the United States spurred by the warm reception of the Hisense television line-up. Looking ahead to 2017, Hisense is committed to aggressively expanding its presence and prominence as a technology company with new product lines across TV and appliances, expanded sales channels, and major endorsements from industry-leading partners.

Enthusiasm for the Hisense brand has led to the expansion of the TV portfolio beyond the small screen category, bringing its positively reviewed picture quality to screens as large as 100 inches. Hisense also expanded its retail partnerships across thousands of new locations and is now available in every major consumer electronics retailer in the U.S.

"From televisions to appliances, we are focused on developing products that consumers love," said Jerry Liu, CEO of Hisense Americas. "This year, we're looking to provide even more insight into the technologies that enable us to bring premium experiences to consumers worldwide."

Smart Technology AdvancementsAt its core, Hisense is a technology company innovating across a variety of industries with the goal of making a meaningful impact on the world. The company's innovations include traffic control systems, smart and safe city management technology, medical processing and display technology, optical switching devices that help power the Internet and more.

With forty-seven years of experience in display equipment research and development as well as production, Hisense has mastered multiple advanced image reality treatment technologies that are saving lives around the world. Hisense has leveraged the company's expertise in display technology to establish a suite of cutting-edge medical solutions – surgical, operating room, endoscopic and consultation displays, as well as mobile nursing and computer assisted surgical systems – which will be showcased for the first time at CES this year.

TV Display InnovationHisense has a long history as a leader in TV display technology and is driving the future of home theatre with a state-of-the-art true 4K Laser Cast TV. The short-throw projector is HDR compatible and features a UHD upscaler, displaying a stunning 4K picture measuring 100 inches diagonally. It will be available in the summer of 2017 for $12,999.

Awarded 20 patents, Hisense's ULED® technology is up to three times brighter than OLED, with better dynamic range and perception of black and white. The technology enhances color, contrast, black level, brightness and smooth motion with a combination of advanced hardware and software. Hisense will release a new generation of ULED® technology in 2017.

Content and Consumer-First OfferingsHisense recognizes that without easy access to content, picture quality is irrelevant. The newly redesigned Hisense Smart TV platform offers quick and easy one-touch access to all of the content consumers want, including a full web browser for Hisense brand 4K televisions. Hisense TVs have helped the streaming content explosion to the tune of 20 million hours of streaming content per day worldwide.

In North America, the Hisense Smart TV platform pre-installs more than 40 leading apps – including Netflix, Amazon, YouTube and VUDU – which can be accessed with the touch of a button on the newly designed remote. In addition, Hisense Smart TV users can experience content from hundreds of apps through the Opera TV Store that encompass movies and TV shows, music, gaming, lifestyle, fashion, news and international content from iTalkBB (China), YuppTV (India), and ClaroVideo (Mexico), Cinepolis Klic (Mexico) and BigStar TV (Latin America).

Additionally, Hisense is providing multiple built-in OTT options for consumers who prefer to cut the cord. The new platform will feature services from TikiLive, Pluto and Xumo.

Hisense Roku TVHisense is also building on the success of the H4 series by introducing a new lineup of 4K Hisense Roku TVs in the U.S. The new lineup features two series – the R6 and the R8 series with Dolby Vision. These TVs run the Roku® operating system and feature a simple home screen with icons for entertainment favorites.

Supporting a Mobile WorldAlso on display will be Hisense's mobile technologies that are gaining market share globally. At CES, Hisense will feature three unique smartphones – the A2 with a dual screen, C30 with shatterproof capabilities and E76 with advanced security technologies – as well as the E9, a high-end tablet.

A New Generation of Home AppliancesAs the longstanding leader in refrigeration and air conditioning technology in China, South Africa and Australia, Hisense is growing its market share in North America with the expected launch of 15 new air products this year – including two cloud-based smart offerings.

Available in an array of size options, the new line features Portable Air Conditioners from 14K through 8K BTU as well as Dehumidifiers from 100, 70, 50 and 35 pints. Hisense Portable Air conditioners feature an innovative I-FEEL temperature sensor designed for maximum comfort. Built into the remote control, I-FEEL can sense the surrounding temperature and seamlessly connect to the unit. An ultra-quiet compressor and cross-flow centrifugal fan design are also new for 2017, providing strong and quiet airflow.

Partnering with Fan FavoritesBuilding on the popularity of Hisense TVs among the gaming community, the company has entered into a strategic partnership with one of the most storied esports teams in the world. Starting this year, Hisense will become the "Official TV" of Evil Geniuses, a premiere professional gaming team with a worldwide following. With an audience that is expected to exceed 427 million globally by 2019 according to Newzoo, the future of esports is bright.

Hisense is also continuing its NASCAR relationship in 2017. The company will be the title sponsor of this year's Xfinity Series Hisense 300 race in Charlotte, NC on Saturday, May 27, 2017, and the primary sponsor of the Joe Gibbs Racing team with leading drivers, Denny Hamlin and Erik Jones. Both NASCAR drivers will be on-site at CES to interact with fans and sign autographs.

Hisense's technology will be on display at booth #10039 at the Las Vegas Convention Center during CES 2017. For more information on Hisense's 2017 line-up, please visit www.hisense-usa.com/ces.

Hisense Company Ltd. is multinational consumer technology manufacturer and one of the largest television brands in the world.  The Company is committed to advancing the consumer technology industry across North America and has dedicated R&D centers in Atlanta, Georgia; San Jose, California; and Toronto, Canada to enable localized product development and innovation.

Hisense products are available globally in over 130 countries and regions, with production facilities in China, Mexico, South Africa and Czech Republic, as well as sales offices across North America, Europe, Australia, Middle East, and Southeastern Asia.

Roku is a registered trademark and Roku TV is a trademark in the U.S. and in other countries. 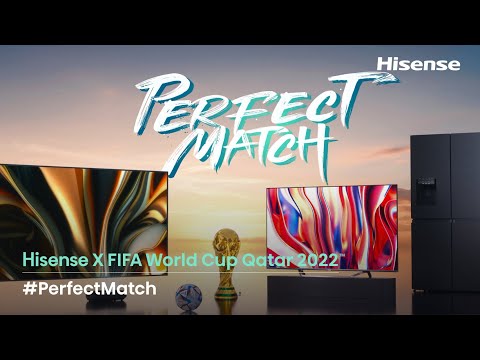