SEOUL, South Korea, Feb. 3, 2018 /PRNewswire/ -- A fleet of Hyundai Motor Company's next generation fuel cell electric cars have succeeded in completing a self-driven 190 kilometers journey from Seoul to Pyeongchang. This is the first time in the world that level 4 autonomous driving has been achieved with fuel cell electric cars, the ultimate eco-friendly vehicles. 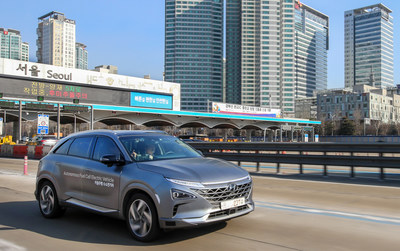 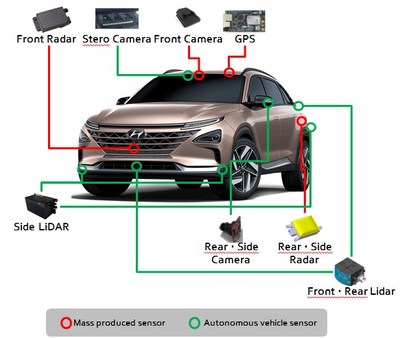 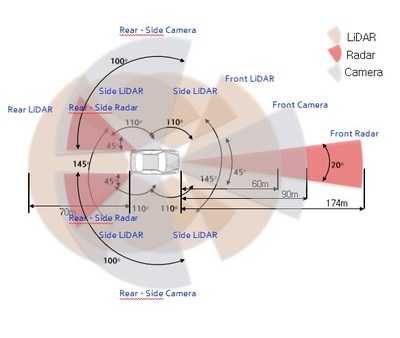 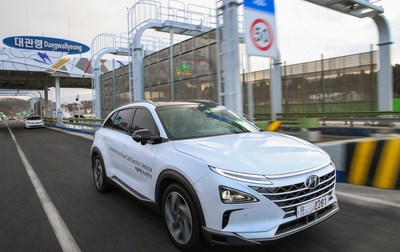 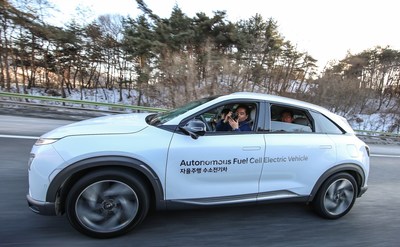 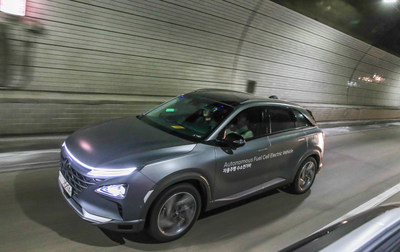 Until now, autonomous driving has been demonstrated at a limited speed on some sections of domestic roads, but this is the first time autonomous cars have driven such a long distance at 100 km/h-110 km/h, the maximum speed allowed by law on Korean highways.

Five Hyundai vehicles completed the journey. Three vehicles are based on Hyundai's next-generation fuel cell electric SUV NEXO, scheduled to be released in Korea next month, and the other two are Genesis G80 autonomous vehicles. All vehicles are equipped with level 4 self-driving technology, as defined by the SAE international standards, and 5G network technology. The vehicles used for the demonstration are "futuristic vehicles" that closely represent Hyundai's three visions for future mobility: connected mobility; freedom in mobility; and clean mobility.

The demonstration started in Seoul on Feb. 2 with the 'CRUISE' and 'SET' buttons being pressed on the autonomous-driving steering wheel of each vehicle, at which point the cars immediately switched to self-driving mode and began the 190 km journey to Pyeongchang. Entering the highway, the vehicles moved in response to the natural flow of traffic. They executed lane changes and overtaking maneuvers, and navigated toll gates using Hi-pass, South Korea's wireless expressway payment system.

Building on the successful demonstration of Hyundai's vehicles which drove autonomously in Las Vegas during the Consumer Electronics Show (CES) early last year, these cars featured a number of advanced technologies that enabled them to recognize surrounding vehicles more accurately and make better judgments at junctions and at branching roads, navigate through toll gates by accurately calculating the toll gate's width and position, and precisely pinpoint the vehicle's position on a map by using external sensors fitted for situations when the GPS signal was interrupted, such as going through long underground tunnels.

Hyundai conducted a significant number of highway test drives amounting to hundreds of thousands of kilometers traveled, which enabled them to accumulate a vast amount of data that helped enhance the performance of its self-driving vehicles.

"Hyundai's philosophy for developing autonomous driving technology is to provide the highest level of safety combined with a high standard of convenience that our customers expect," said Jinwoo Lee, head of the Intelligent Safety Technology Center at Hyundai Motor Group.

The exterior and interior of self-driving vehicles used for this demonstration look similar to Hyundai's other mass-produced models, but they are equipped with various cameras and LIDARs. Adding a small number of sensors to mass-produced vehicles has enabled the realization of fully autonomous driving technology, and thus brings the company a step closer to the commercialization of self-driving technology.

Autonomous driving processes a high volume of data, which requires a lot of power. The fuel cell electric model is able to produce electricity through a reaction between hydrogen and oxygen in the fuel cell stack, making it the optimal vehicle model choice for this test.

The NEXO fuel cell electric SUV can drive more than 600 km on a single charge, which takes approximately five minutes. The model boasts world-class system efficiency of 60%, durability equivalent to internal combustion engine-driven vehicles and a load space of 839 liters.

Passengers in the rear seats can use "Home Connect," a car-to-home technology which enables the user to access and control IoT devices installed in their smart home. They can view home camera images in real-time, control the lighting, remote door lock or TV, and even manage home energy systems. Hyundai plans to phase in the home-to-car and car-to-home technology to its vehicles from the first half of 2018 and from 2019, respectively.

"Assistant Chat" is a technology that allows users to ask questions to a Chat Bot with simple voice commands and receive answers in the form of text or images.

"Wellness Care" can monitor health information of passengers seated in the rear of the vehicle, such as their stress level, heart rate, and mood state. They can also access relaxing therapeutic services, and they can be connected with a health consultant through a real-time video call.

The Korean karaoke application "Everysing" also allows passengers to sing along to music on their journey, and it's possible to stream video to the rear-seat entertainment system. Lastly, users can receive real-time traffic information notifications, supported by multiple languages, including Korean, English and Chinese.

These advanced infotainment features enable drivers to make the best use of their time spent in autonomously driven vehicles, making them more than a simple means of moving from one location to another.

Hyundai Motor Group, which includes flagship units Hyundai Motor and Kia Motors, is preparing for the commercialization of the SAE standard Level 4 compliant autonomous-driving system in smart cities by 2021. To this end, the company announced plans at CES 2018 last month to jointly develop self- driving technology with Aurora Innovation, a U.S. based autonomous driving startup.

Hyundai also plans to commercialize the technology for fully autonomous driving by 2030.

Furthermore, since August last year, Hyundai has been researching and building its V2X infrastructure. As a founding member of the American Center for Mobility, an American research institute for future mobility, Hyundai Motor Group last October invested 5 million dollars in the ACM-led construction of state-of-the-art testing facilities.

Established in 1967, Hyundai Motor Company is committed to becoming a lifetime partner in automobiles and beyond. The company leads the Hyundai Motor Group, an innovative business structure capable of circulating resources from molten iron to finished cars. Hyundai Motor has eight manufacturing bases and seven design and technical centers worldwide and in 2017 sold 4.5 million vehicles globally. With more than 110,000 employees worldwide, Hyundai Motor continues to enhance its product line-up with localized models and strives to strengthen its leadership in clean technology, starting with the world's first mass-produced fuel cell electric vehicle, ix35 Fuel cell and IONIQ, the world's first model with three electrified powertrains in a single body type.

More information about Hyundai Motor and its products can be found at:http://worldwide.hyundai.com or http://globalpr.hyundai.com