JACKSONVILLE, Fla., April 20, 2018 /PRNewswire/ -- Iguana Investments and the Jacksonville Jaguars introduced The Cordish Companies yesterday as a development partner for a $2.5 billion world-class, mixed-use district in the downtown sports complex.  The announcement was made at the Jaguars annual State of the Franchise presentation during which conceptual renderings of the new development were unveiled. 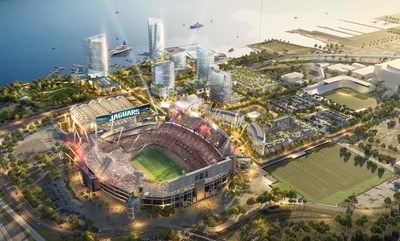 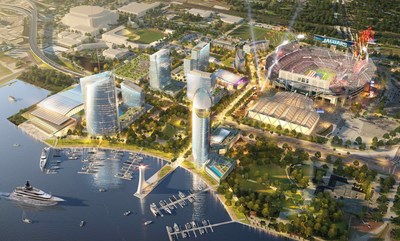 "The Cordish Companies understand the challenges and, therefore, the opportunities in reimaging downtown districts and entertainment complexes throughout the country," said Jaguars Owner Shad Khan.  "There are many qualities that make Cordish our choice in Jacksonville, but one in particular is the company's ability to customize and tailor its approach to the property it will develop while being very mindful of the community it will serve.  The first phase of this development will be key, and we do not think we could have chosen a better partner."

A fourth generation, family-owned company and one of the largest and most respected developers worldwide, The Cordish Companies arrives in Northeast Florida as leaders in urban renewal, having been awarded seven Urban Land Institute Awards for Excellence in revitalizing urban cores. Welcoming over 50 million annual visitors, Cordish developments are among the highest profile dining, entertainment and hospitality destinations in the country. The Cordish Companies has become a market leader in sports-anchored, mixed-use developments, partnering with many of the country's leading professional sports franchises and media companies including the St. Louis Cardinals, FOX Sports, Philadelphia Flyers, Comcast-Spectacor, NBC Sports, Professional Bull Riders, Sporting KC and most recently the Texas Rangers in the heart of the Arlington Texas Entertainment District.

"It is an honor to have been selected by the Jacksonville Jaguars and Iguana Investments as their development partner in this dynamic vision for the Jacksonville Sports Complex," stated Blake Cordish, Vice President of The Cordish Companies. "We are committed to delivering a transformational world-class project that will create thousands of new jobs, attract millions of new visitors to the region, and play an important role in the revitalization of downtown Jacksonville."