WASHINGTON, Aug. 7, 2017 /PRNewswire-USNewswire/ -- For the first time ever, AARP The Magazine (ATM) is providing readers with a double cover on its August-September issue, featuring an exclusive commemorative "Summer of Love" painting by legendary artist Peter Max. Underneath this brightly colored wrap, the official cover showcases actress Jessica Lange, who provides a retrospective look at her career and her thoughts on life, happiness, resilience and aging in Hollywood. The cover package also includes 5 things you probably didn't know about Jessica, and comments about her long-time partner Sam Shepard, who passed away in July. 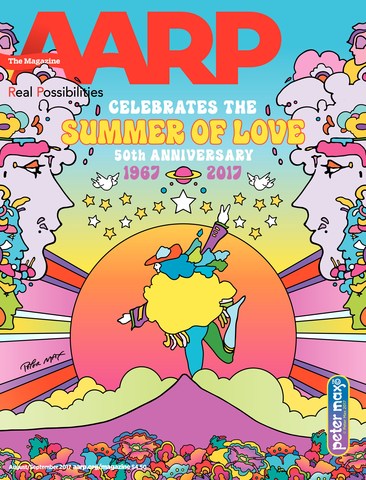 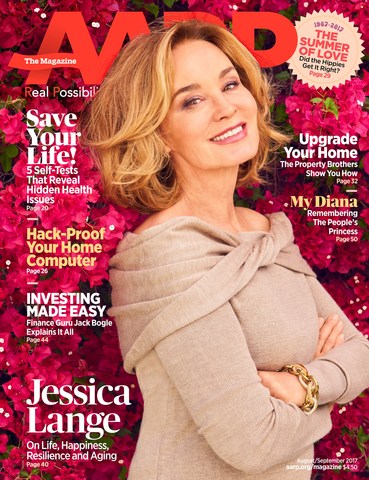 In this issue, readers will find an inspirational home special report featuring TV's Property Brothers, Jonathan and Drew Scott. Whether it's making a family space more elegant or building out that private studio, the twins share cost-efficient secrets on upgrading, downsizing and reimagining homes for people nearing retirement. ATM also offers 5 self-tests that can help save lives in this month's special health report. Plus, AARP announces the launch of TV for GrownupsSM, a new initiative that will bring audiences closer to their favorite television content with news, interviews, weekly online reviews and previews, screenings and coverage of the latest home entertainment technology.

Summer of Love: AARP The Magazine celebrates the 50th anniversary of one of the significant social movements of our time with a special Summer of Love cover featuring an original, exclusive artwork by legendary artist Peter Max.  In addition, Editor in Chief Bob Love writes an original essay that looks at the legacy of the Summer of Love from a Boomer perspective: how its politics, music, philosophy and creativity continue to influence America today.

John Lithgow has had a long and distinguished career—from 2016's "The Crown" to the 1990s TV comedy series "Third Rock from the Sun" and now the upcoming "Pitch Perfect 3." In an interview with our editors, Lithgow talks about being babysat by Coretta Scott King, the laughter he brings to horror roles, and self-reflection on life after 50.

20 years ago the world lost the grace and poise of Princess Diana.  From her press secretary and personal butler to her biographer and a royal historian, ATM shares personal reflections from people who knew and were emotionally touched by the late Princess of Wales.

Health:Many health problems are impossible to miss. But sometimes, symptoms of underlying health issues are subtle and mysterious. ATM shares 5 fast and easy self-exams that can tell you if it's time to get off the couch and into the doctor's office.

Most Americans have experienced the pitfalls of travel – germs, airsickness and bedbugs – but many don't realize the easy steps they can take to prevent these common bumps in the road from wrecking their vacation. The August/September issue of ATM shares 7 surprising items to keep you energized and well while on the road.

Personal Finance: Many consider Jack Bogle, the founder of Vanguard, as one of the greatest minds ever to contemplate Wall Street. In an extended, exclusive interview, Bogle explains and simplifies the stock market, and shares why every American should have a working knowledge of the financial markets – and at least some savings invested there.

Who doesn't get annoyed when they discover they've been hit by a hidden bank fee? ATM shares details of six little known charges tacked on to our accounts, and ways to avoid paying them.

Scams:This spring, more than 200,000 computers across 150 countries were cyberattacked in one of the worst international hackings. ATM shares 7 ways to avoid computer viruses, as malware strikes continue to rise.

About AARP The MagazineWith more than 37 million readers, AARP The Magazine is the world's largest circulation magazine and the definitive lifestyle publication for Americans 50 and older. AARP The Magazine delivers comprehensive content through health and fitness features, financial guidance, consumer interest information and tips, celebrity interviews, and book and movie reviews. AARP The Magazine was founded in 1958 and is published bimonthly in print and continually online. Learn more at www.aarp.org/magazine/. Twitter: twitter.com/AARP

About AARPAARP is the nation's largest nonprofit, nonpartisan organization dedicated to empowering Americans 50 and older to choose how they live as they age. With nearly 38 million members and offices in every state, the District of Columbia, Puerto Rico, and the U.S. Virgin Islands, AARP works to strengthen communities and advocate for what matters most to families with a focus on health security, financial stability and personal fulfillment. AARP also works for individuals in the marketplace by sparking new solutions and allowing carefully chosen, high-quality products and services to carry the AARP name.  As a trusted source for news and information, AARP produces the world's largest circulation publications, AARP The Magazine and AARP Bulletin. To learn more, visit www.aarp.org or follow @AARP and @AARPadvocates on social media.