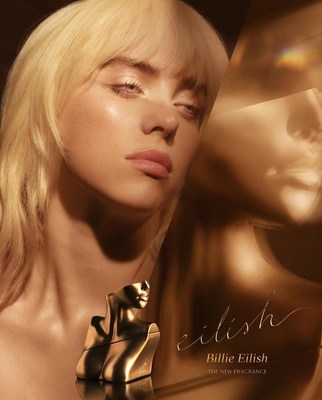 Debuting alongside the fragrance is the exclusive Eilish campaign video starring Billie Eilish. To bring the fragrance to life, Billie chose photographer Amanda Charchian, who worked with creative agency Mazarine New York, to capture the same feeling of warmth and sensuality in the film that the fragrance evokes on your skin. Immerse yourself in the world of Eilish, premiering only on BillieEilishFragrances.com.

Eilish is a captivating Amber Gourmand that attracts you with a warm, cozy scent that feels like home no matter where you are. The fragrance opens with sugared petals, accented by juicy mandarin and red berries. The heart of the fragrance unfolds with soft spices, rich cocoa, and creamy vanilla. The scent is anchored by base notes of warm musks, tonka bean, and sleek woods. The bottle is inspired by Billie's favorite parts of the body: the chest, neck, and collarbone, and is gilded in beautiful amber-bronze.

"One of the most important parts of our partnership was making sure Billie was able to debut her signature fragrance through her own channels, on her own terms, to continue to connect directly with her fans. From the very first meeting to today's launch, Parlux worked closely with Billie to make sure every step of the process aligned with her vision, which included the fans being able to get the scent directly from her.  After many months of a unique remote development process, we are so excited to introduce Eilish to the world.''- Lori Singer, President, Parlux Limited

Eilish, $68, will launch direct-to-consumer exclusively at BillieEilishFragrances.com on November 10th, 2021

Eilish is vegan, cruelty-free, and made with clean ingredients.

With the release of her sophomore album Happier Than Ever' debuting at #1 in the Billboard 200 in the U.S. and in 19 countries across the globe, the 19-year-old Los Angeles native remains one of the biggest stars to emerge in the 21st century. Since the release of her debut single "ocean eyes" in 2015, Eilish continues to shatter the ceiling of music with her genre-defying sound. Fast forward from her humble breakout, her album WHEN WE ALL FALL ASLEEP, WHERE DO WE GO? also debuted at No. 1 on the Billboard 200 in the U.S as well as 17 additional countries around the world upon release in 2019, and was the most streamed album of that year. Both album's were critically acclaimed worldwide and were written, produced and recorded entirely by BillieEilish and brother FINNEAS. Billie Eilish has made history as the youngest artist to receive nominations and win in all the major categories at the 62nd GRAMMY® Awards, receiving an award for Best New Artist, Album of the Year, Record of the Year, Song of the Year, and Best Pop Vocal Album, and is also the youngest artist to write and record an officialJames Bond theme song, 'No Time To Die.' Most recently, Billie Eilish took home both Record of the Year for 'everything i wanted,' and Best Song Written For Visual Media for 'No Time To Die.' Billie Eilish will embark on her sold-out arena world tour in early 2022.

Parlux, a leading global beauty company, designs, manufactures, markets and distributes prestige fragrances and related products.  It is ranked among the top cosmetic and fragrance companies globally with a brand portfolio that has strong global awareness and marketing penetration. Parlux has been partnering with pop culture icons, fashion designers and lifestyle brands since 1987, bringing their vision to life through fragrance.