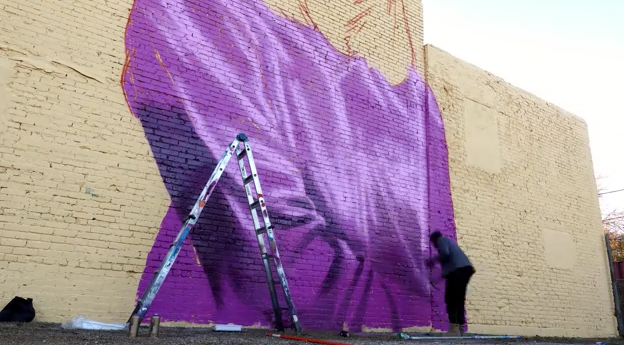 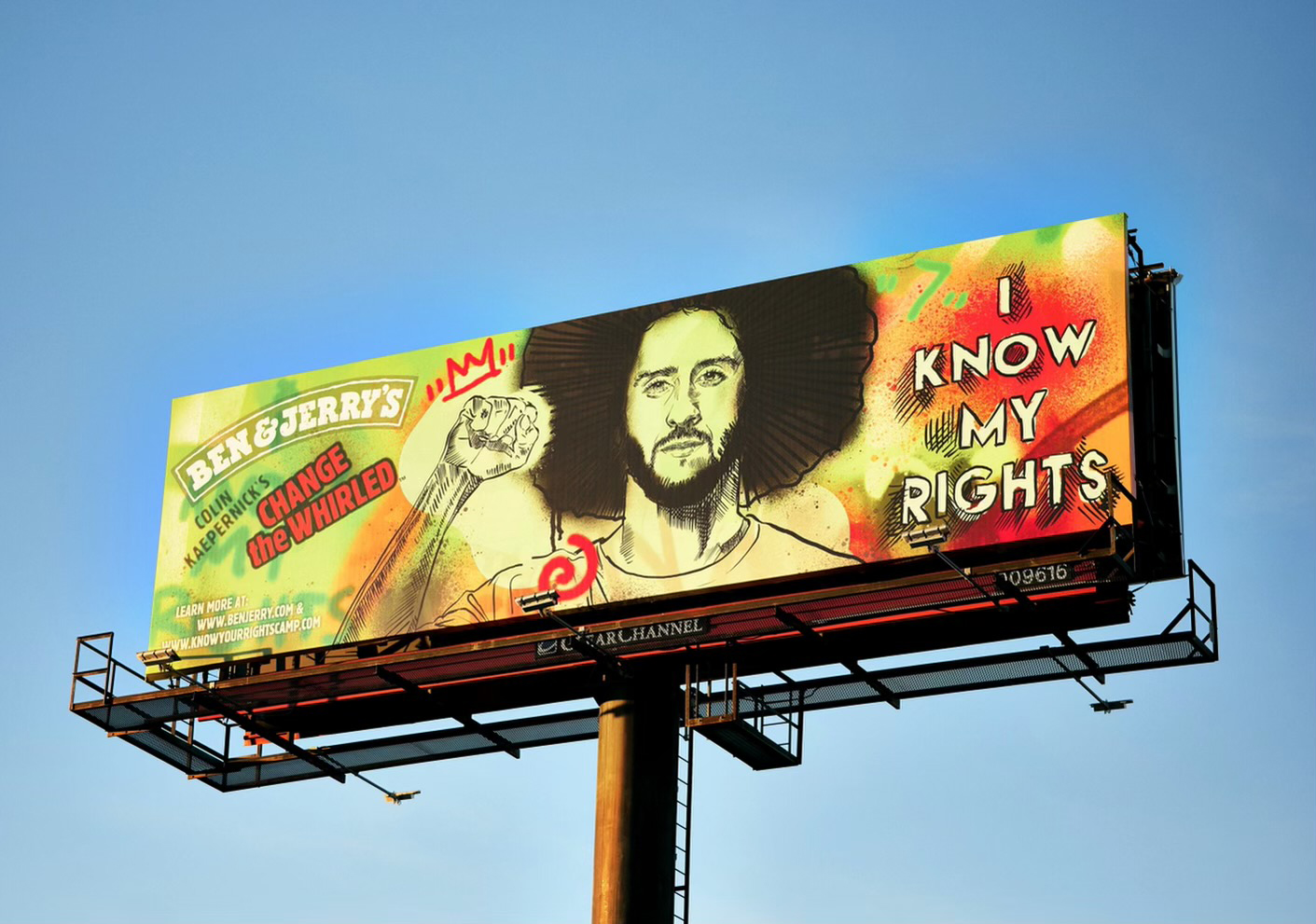 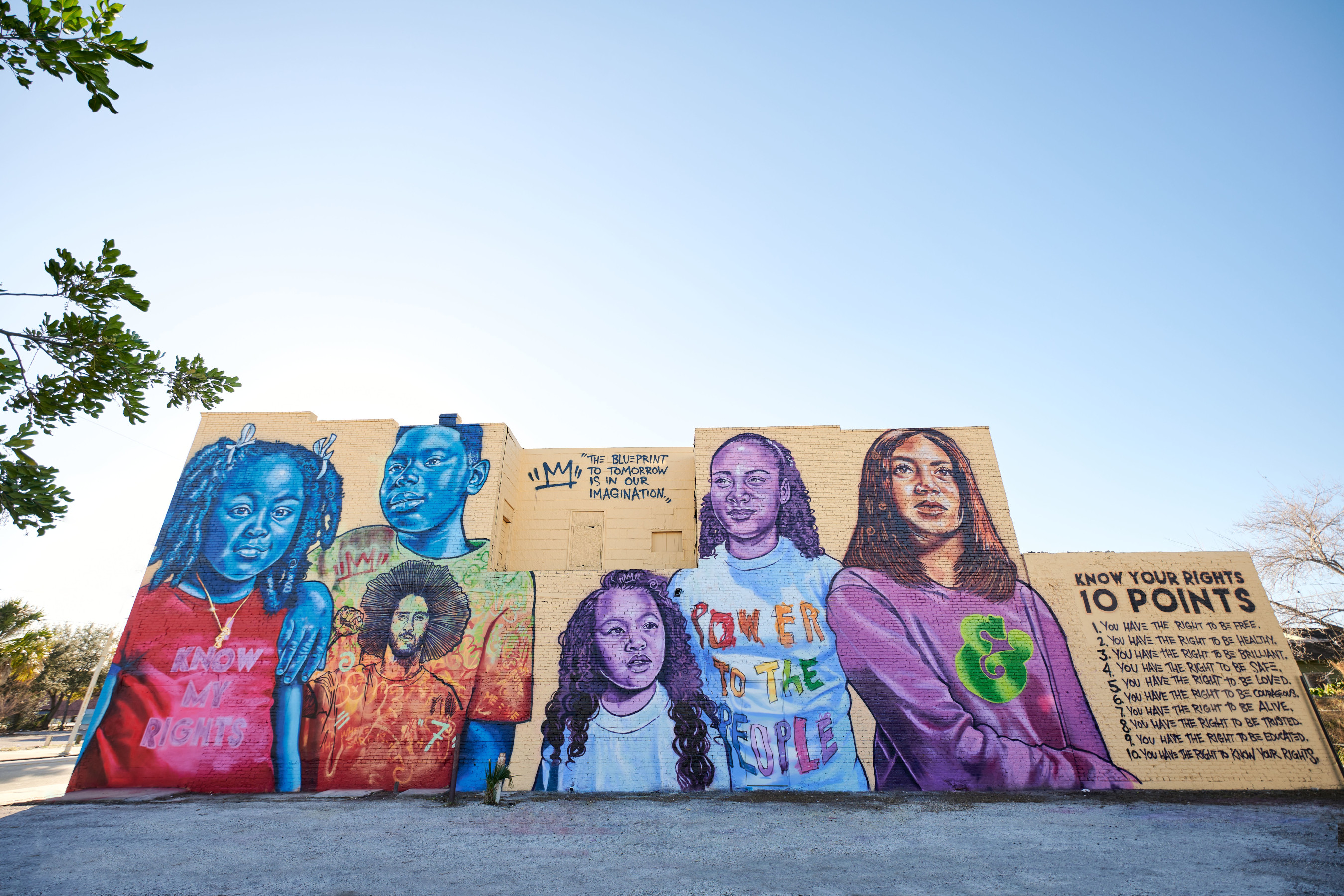 The 30' x 90' mural on Moses White Blvd. features portraits of Tampa youth alongside Know Your Rights Camp (KYRC) volunteers. The artwork depicts a young person wearing a t-shirt emblazoned with an image of the freedom fighter and former San Francisco 49er raising his fist. Others on the mural are wearing shirts proclaiming "I KNOW MY RIGHTS," a reference to Know Your Rights Camp, the non-profit Kaepernick founded in 2016 to empower and liberate Black and Brown people. The mural was developed in collaboration with artist-activist Brandan "BMike" Odums, KYRC, and Ben & Jerry's. Ben & Jerry's funded the mural as part of its Change the Whirled collaboration with Kaepernick and KYRC.

Kaepernick became an unsigned free agent after a season of kneeling during the Star-Spangled Banner at the start of NFL games to protest police violence and systemic oppression globally. Since then, he has become a prominent activist, working to dismantle systemic racism and white supremacy.

"As we look back, it's clear that Colin was on the right side of history," said Chris Miller, Ben & Jerry's Head of Global Activism. "His pre-game protests were before George Floyd's murder; before the 2020 summer of racial reckoning. He knew a long time ago that we need to address the root causes of racism and the structures of our society that are so brutal to Black people. We wanted to be part of the effort to honor Colin's courage and legacy because we share the same values."

Earlier this year Ben & Jerry's launched Colin Kaepernick's Change the Whirled, a vegan, non-dairy frozen dessert. Kaepernick is donating his proceeds from the pints to Know Your Rights Camp.

The mural unveiled today was created by Brandan "BMike" Odums, an activist, educator and street artist who is also a friend of Kaepernick and the designer of the Change the Whirled pint. His work celebrates Black history and strengthens the movement for racial justice and equity. "The blueprint to tomorrow is in our imagination," Odums said. "I think, ultimately, it's the idea of allowing people, especially young people, the agency to understand that the way things are isn't the way they're supposed to be."

The mural—titled "Change the Whirled"— is part of a larger effort to support locally-owned businesses and community organizations, and to contribute to the vibrancy of Old West Tampa. As part of the project's community engagement, neighbors are invited to a free, COVID-safe community drive-thru at the mural site at noon on Sunday, February 7th. Members of the community are invited to pick up a family meal (enough for 4-6 people), a pint of Colin Kaepernick's Change the Whirled non-dairy frozen dessert, and gift certificates to a local salon and barbershop (while supplies last).

The meal will be hosted by Ben & Jerry's and Know Your Rights Camp. In addition, four Tampa community groups will receive $5,000 each for their work in the areas of power-building, educational equity, and affordable housing.

As an aspiring social justice company, Ben & Jerry's believes in a greater calling than simply making a profit for selling its goods. The company produces a wide variety of super-premium ice cream, yogurt and sorbet using high-quality ingredients. Ben & Jerry's incorporates its vision of Linked Prosperity into its business practices in a number of ways including a focus on values-led sourcing. In 2015 the company completed its transition to using entirely non-GMO (genetically modified organisms) ingredients by source as well as to fully source Fairtrade-certified ingredients wherever possible, which benefits farmers in developing countries. Ben & Jerry's products are distributed in 35 countries in supermarkets, grocery stores, convenience stores, franchise Ben & Jerry's Scoop Shops, restaurants and other venues. Ben & Jerry's, a Vermont corporation and wholly owned subsidiary of Unilever, operates its business on a three-part Mission Statement emphasizing product quality, economic reward and a commitment to the community. Ben & Jerry's became a certified B Corp in 2012. The Ben & Jerry's Foundation granted $3.4MM in 2020 to support grassroots organizing for social and environmental justice around the country. The Foundation's philanthropy is guided by Ben & Jerry's employees who serve on committees that review applications.