IRVINE, Calif., May 4, 2017 /PRNewswire/ -- Taco Bell went and did it again. First, they created a taco shell made entirely of crispy, marinated white-meat chicken. Now, they've done the same with chips, complete with dippable Nacho Cheese Sauce, to reinvent the classic chips-and-dip duo like never before. 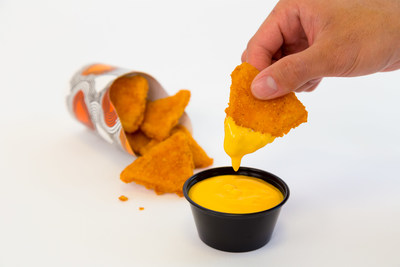 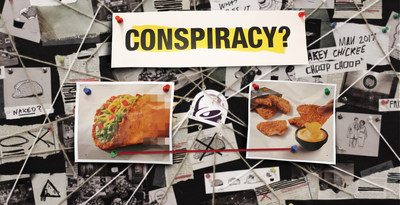 "The world wasn't ready to say goodbye to Naked Chicken, and neither were we," said Marisa Thalberg, Chief Marketing Officer at Taco Bell Corp. "Just when you thought it couldn't get any better, we went and added our famous Nacho Cheese to expose the traditional chips and cheese combo like only Taco Bell can."

The chips are made of marinated, all-white-meat chicken kicked up with bold Mexican spices and seasoning. Paired with Taco Bell's beloved Nacho Cheese sauce, the marriage of flavors takes a left turn from how fans have traditionally eaten both chicken and chips, making the Naked Chicken Chips the hottest new couple nationwide.

Naked Chicken Chips saw buzzworthy tests in select markets last summer. In addition to flying solo in either a 6-piece for $1.99 or as a 12-piece for $3.99, the chips will be available in a $5 Box including a Burrito Supreme, Crunchy Taco and Medium Drink, all for a limited time.

Naked Chicken isn't the only thing that's back. The Council For Eating Fried Chicken The Same Way You Always Have, a group dedicated to the preservation of traditional chicken values that first surfaced during the launch of the Naked Chicken Chalupa have already begun their marketing campaign against Naked Chicken Chips – which they deem equally as bold and dangerously delicious.

Fans are encouraged to follow along as the menu item's release approaches using the hashtag #NakedChickenChips for the chance to be among the first to try the Naked Chicken Chips in select cities nationwide.

About Taco Bell Corp.Taco Bell Corp., a subsidiary of Yum! Brands, Inc. (NYSE: YUM), is the nation's leading Mexican-inspired quick service restaurant (QSR) brand. From breakfast to late night, Taco Bell serves made-to-order and customizable tacos and burritos, among other craveable choices, and is the first QSR restaurant to offer American Vegetarian Association (AVA)-certified menu items. Taco Bell and its more than 350 franchise organizations proudly serve over 42 million customers each week through 7,000 restaurants across the nation, as well as through its mobile, desktop and delivery ordering services. Overseas, Taco Bell has over 250 restaurants, with plans to add 2,000 more restaurants internationally within the next decade. The brand encourages its fans to "Live Mas" and connects with them through sports, gaming and new music via its Feed The Beat® music program. Taco Bell also provides education opportunities and serves the community through its nonprofit organization, the Taco Bell® Foundation™, and connects fans with their passions through programs such as the Live Mas Scholarship program. In 2016, Taco Bell was named as one of Fast Company's Top 10 Most Innovative Companies in the World.