COLUMBUS, Ga., April 8, 2019 /PRNewswire/ -- With the help of New Female Artist of the Year nominee Carly Pearce, Aflac, the leader in supplemental insurance sales at U.S. worksites and exclusive insurance partner of the Academy of Country Music Awards®, today announced the recipient of the second annual Aflac ACM Lifting Lives Honor. Singer-songwriter Brandon Ray from Big Spring, Texas, was recognized for his outstanding and selfless contributions toward bringing the healing power of music to patients in hospitals across the country as a volunteer with Musicians On Call, a nonprofit organization that brings live and recorded music to the bedsides of patients in health care facilities. Aflac and Carly Pearce delivered the honor in partnership with ACM Lifting Lives® – the philanthropic arm of the Academy of Country Music® – during the ACM Stories, Songs and Stars event on April 5. 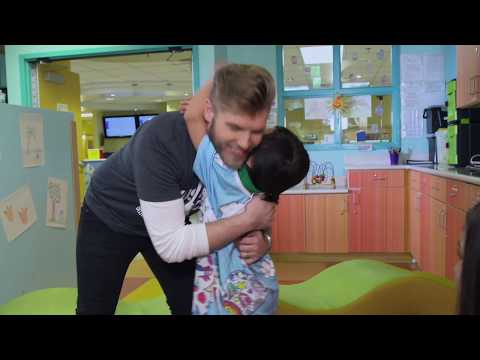 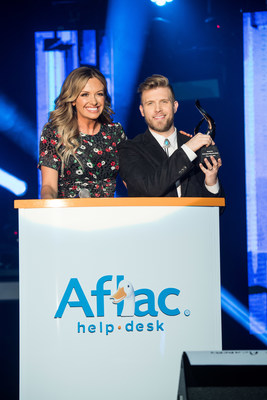 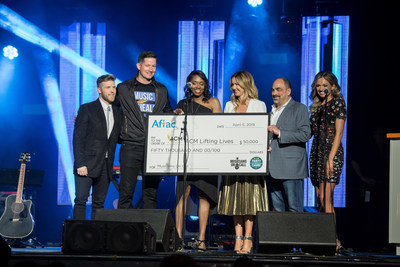 "Receiving the Aflac ACM Lifting Lives Honor and being a part of the 54th Annual ACM Awards® has been an incredible experience," Ray said. "Learning the guitar helped me recover from an injury when I was very young, so I know the healing power of music. Just knowing that my music is helping others, especially pediatric patients, through their healing process means the world to me, because what you do with the talent you've been given – your ability to improve the lives of those in need – is what it's all about."

To amplify awareness of the positive impact that music can have on people's lives and health, the trophy presentation with Pearce and Ray was featured in a new Aflac television commercial. The custom spot, produced by dick clark productions, aired just 48 hours later during last night's 54th Academy of Country Music Awards® on CBS Television Network. Also during the broadcast, Aflac ran its "Aflac Isn't" spot, part of the company's new marketing campaign focusing on popular misconceptions about the products and services Aflac provides. The company believes by shining a light on these misconceptions, more people will begin to understand the true value of Aflac coverage.

"I'm so grateful for how music has been a comfort in my life, even from an early age as my grandparents introduced me to Country's finest. Now, touring the world and hearing stories fans have shared about their own happiness and challenges is a consistent reminder of the power in a song to truly change circumstances," explained Pearce. "Joining Aflac and ACM Lifting Lives® to highlight this notion is so very special, and I'm honored to help celebrate."

Ray discovered his passion for music while recovering from two foot surgeries after a baseball injury. Learning the guitar helped with his recovery. Today, as a member of Bobby Bones' elite Class of 2018 Artists to Watch, Ray tours with Bobby and the Raging Idiots. He routinely volunteers his time to perform for children's hospitals in Nashville and has been a part of Musicians On Call since 2016, playing for nearly 800 patients, as well as their families and hospital staff. One week after the 2017 tragedy at the Route 91 Harvest Festival, Ray joined Musicians On Call in visiting Las Vegas to bring joy through music in a time of need. The artists visited with and performed for the victims, their families, caregivers and first responders. On Thursday, April 4, Brandon returned to Las Vegas to celebrate the one-year anniversary of Musicians On Call at Sunrise Children's Hospital, thanks to the support of ACM Lifting Lives® and Aflac. Brandon played for kids at the hospital and performed for patients and caregivers at Sunrise Hospital and Medical Center in Las Vegas prior to the ACM Awards®.

"At Aflac, we recognize that music's influence goes well beyond entertainment and can have a lasting impact on our overall health and wellness, so we are proud to partner with ACM Lifting Lives® to present this well-earned second annual honor to Brandon," Aflac Vice President of Brand and Creative Services Shannon Watkins said. "Brandon's dedication to helping patients heal through music coincides with our company's core values illustrated by our 24-year commitment to helping provide care and support for children and families facing pediatric cancer. He exemplifies selflessness and compassion, and the difference he's made in people's lives across the nation is extraordinary."

"We're proud to partner with Aflac and ACM Lifting Lives® to nominate Brandon for this esteemed recognition," said Pete Griffin, president and CEO of Musicians On Call. "Brandon has gone above and beyond to help deliver the healing power of music to those who need it most. When Musicians On Call decided to organize an emergency response after the tragic events of Oct. 1, 2017, Brandon was among the first of our volunteer community to drop everything to fly to Vegas to perform at the bedsides of patients. It's so special to be able to celebrate Brandon in the city that he brought so much joy to in a time of need."

In addition to recognizing Ray, Aflac is contributing $50,000 to Musicians On Call through ACM Lifting Lives®, which is dedicated to improving lives through the power of music. The organization develops and funds music-related therapy and education programs. It also serves members of the community who face unexpected hardships through its Diane Holcomb Emergency Relief Fund. Since 2008, ACM Lifting Lives® has given more than $8 million to over 150 causes, creating awareness and helping those in need.

"The healing power of music spans across demographics and psychographics – meaning it connects people with differing attitudes, ambitions and aspirations," Watkins added. "Each touchpoint throughout ACM Awards® weekend was an opportunity for Aflac to use today's top artists and songs to forge unique, musical bonds with consumers of all ages and backgrounds who may one day experience a serious illness or injury requiring them to rely on music and supplemental insurance like Aflac's to fully recover."

Aflac also had several activations throughout ACM Awards® week, including:

The purpose of the Aflac ACM Lifting Lives Honor is to acknowledge an individual who has made significant impact by healing through the power of music. The ACM Lifting Lives Board and Aflac selected Ray based on his long-term volunteer efforts using his music abilities to make a positive impact in the community through Musicians On Call. The inaugural recognition was presented to Judith Pinkerton last year, honoring her excellence and long-term efforts towards the development and growth of the music therapy profession.

About Aflac IncorporatedAflac Incorporated (NYSE: AFL) is a Fortune 500 company helping provide protection to more than 50 million people through its subsidiaries in Japan and the U.S., where it is a leading supplemental insurer, by paying cash fast when policyholders get sick or injured. For more than six decades, insurance policies of Aflac Incorporated's subsidiaries have given policyholders the opportunity to focus on recovery, not financial stress. Aflac Life Insurance Japan is the leading provider of medical and cancer insurance in Japan, where it insures 1 in 4 households. Through its trailblazing One Day PaySM initiative in the United States, for eligible claims, Aflac can process, approve and electronically send funds to claimants for quick access to cash in just one business day. For 13 consecutive years, Aflac has been recognized by Ethisphere as one of the World's Most Ethical Companies. In 2018, Fortune magazine recognized Aflac as one of the 100 Best Companies to Work for in America for the 20th consecutive year, and in 2019, Fortune included Aflac on its list of World's Most Admired Companies for the 18th time. To find out more about One Day PaySM and learn how to get help with expenses health insurance doesn't cover, get to know us at aflac.com.

About ACM Lifting Lives®ACM Lifting Lives® is the philanthropic arm of the Academy of Country Music dedicated to improving lives through the power of music. Through partnerships with artists and strong ties in the music industry, ACM Lifting Lives develops and funds music-related therapy and education programs, and serves members of the community who face unexpected hardships through its Diane Holcomb Emergency Relief Fund. Generous donations and the support of artists and fans ensure ACM Lifting Lives is able to fund everything from disaster relief and helping communities in need, to music education in schools and music camps for those with disabilities, to supporting programs that use music therapy as a means to help our veterans and wounded warriors, while providing grants to help them ease back into life. For more information, please visit www.ACMLiftingLives.org.

Aflac Employees Honored for Doing Good and Giving Back...