GARDENA, Calif., Jan. 14, 2019 /PRNewswire/ -- Today, Nissin Cup Noodles announces its "Jump to Japan Sweepstakes" in partnership with the highly-anticipated video game JUMP FORCE from BANDAI NAMCO Entertainment America Inc. Fans across the nation will have the chance to win once-in-a-lifetime prizes through purchase of limited-edition Cup Noodles packaging, including an adventure-packed trip to Japan, copies of the JUMP FORCE game, and official Cup Noodles prizes. 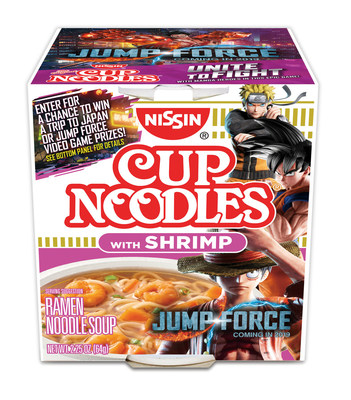 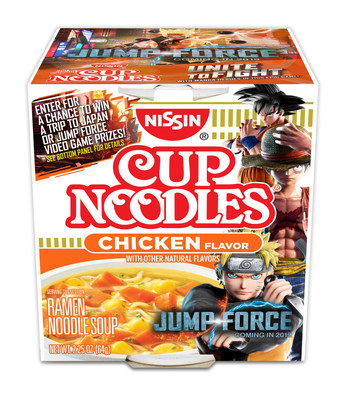 "Our brand fans already celebrate the natural connection between Cup Noodles and gaming," says Jaclyn Park, Cup Noodles Director of Marketing. "Our collaboration with BANDAI NAMCO Entertainment for the release of JUMP FORCE builds on this affinity and reaches out to the millions of manga fans who already see iconic characters such as Goku, Naruto and Luffy enjoying instant ra     men in their respective manga."

From now until June 30, fans can purchase specially marked Cup Noodles and submit a photo of their purchase receipt to www.NissinFoods.com/JumpForce to be entered for a chance to win a wide selection of prizes. Winners will be randomly selected and announced on July 12, including a Grand Prize Winner who will win a trip for two to Tokyo, Japan. The Grand Prize Winner will also receive tickets to the world-famous Cup Noodles Museum in Yokohama, Japan, in addition to several other prizes. There will also be First and Second Winner prizes featuring copies of JUMP FORCE game and highly-coveted Nissin Cup Noodles merchandise.

"JUMP FORCE celebrates 50-years of manga comics that have exploded into our pop culture and have become ubiquitous with video game fans around the world," said Stephen Akana, Brand Manager for BANDAI NAMCO Entertainment America Inc. "The 'Jump to Japan Sweepstakes' partnership with Nissin Cup Noodles will give our fans the chance to experience the unique and exciting culture of Japan, home of their favorite food and entertainment."

Nissin Food Products Co. Ltd. was established in 1958 by Momofuku Ando, who invented the first instant ramen noodle in Japan. In 1970, they established Nissin Foods (USA) Co., Inc. in Gardena, California, introducing ramen noodles to U.S. consumers. In 1971, the company invented Cup Noodles, and revolutionized the industry by making it possible to package, prepare and serve noodles all in the same container. For 60 years, Nissin Foods has been providing consumers with quick and delicious meal solutions.

BANDAI NAMCO Entertainment America Inc., part of BANDAI NAMCO Holdings Inc., is a leading global publisher and developer of interactive entertainment for all major video game consoles, iOS, Android, and online platforms. The company is known for creating and publishing many of the industry's top video game franchises including PAC-MAN®, GALAGA®, TEKKEN®, SOULCALIBUR®, and ACE COMBAT®. BANDAI NAMCO Entertainment America Inc. is the premier publisher in the Western hemisphere for anime-based video games including NARUTO SHIPPUDEN™, DRAGON BALL Z®, and ONE PIECE®. More information about the company and its products can be found at http://www.bandainamcoent.com or www.facebook.com/BandaiNamcoUS.

JUMP FORCE celebrates the 50-year anniversary of Japan's influential Weekly Shonen Jump magazine by pitting its most popular franchises together including DRAGON BALL Z, ONE PIECE, NARUTO SHIPPUDEN, and many more in this electrifying area-based brawler.