MIAMI and NEW YORK, March 2, 2021 /PRNewswire/ -- The Parkinson's Foundation announced the University of Miami Miller School of Medicine is a new site for PD GENEration: Mapping the Future of Parkinson's Disease, a first-of-its-kind national initiative that offers genetic testing and counseling for people with Parkinson's disease (PD) at no cost. The new testing site is made possible by a $1 million grant from the Sharron and Joseph Ashby Hubert Fund of the Community Foundation of Broward to support participation for Broward County residents. Genetic testing and counseling through PD GENEration are available in English and Spanish both in-person at the university's medical school and online.

"We are truly grateful for the generosity shown by the Sharron and Joseph Ashby Hubert Fund of the Community Foundation of Broward to help us expand the PD GENEration program to better serve the Parkinson's community in South Florida," said John L. Lehr, President and Chief Executive Officer of the Parkinson's Foundation. "This program will help people with PD better understand their diagnosis while improving Parkinson's care by accelerating and supporting research."

Scientists will use the genetic testing results obtained through this study for future research to develop improved treatments and personalized medicine for Parkinson's. The study also aims to help people with PD and their physicians identify whether they may qualify for enrollment in certain clinical trials based on their test results. University of Miami Miller School of Medicine is a Parkinson's Foundation Center of Excellence, one of 33 designated medical centers in the U.S. with a specialized Parkinson's care team that practices the latest treatments and research while providing the best care. The study is led by Dr. Carlos Singer, MD, Professor of Neurology and Founding Director of the Parkinson's Foundation Center of Excellence at the University of Miami Miller School of Medicine.

"I'm participating in PD GENEration because I know that the more information we can gather about Parkinson's disease, the closer we can get to finding better treatments and ultimately, a cure," said Rick Friedland, patient research advocate. "This is also an opportunity for me to not just deal with symptoms, but also support real progress for the Parkinson's community."

PD GENEration is the first national initiative to offer genetic testing for clinically relevant Parkinson's-related genes and genetic counseling at no cost for people with a confirmed diagnosis of Parkinson's disease. The goal of PD GENEration is to improve Parkinson's care by accelerating and supporting research to advance improved treatments and personalized medicine.

"With such a high concentration of people with Parkinson's in South Florida, we are proud to fuel this vital and necessary research with a landmark grant from the Sharron and Joseph Ashby Hubert Fund," said Amanda Kah, Charitable Funds Services Manager at the Community Foundation of Broward. "This cutting-edge research could potentially change the lives of so many people in our community."

About Parkinson's Disease Affecting nearly one million Americans and 10 million worldwide, Parkinson's disease is the second-most common neurodegenerative disease after Alzheimer's and is the 14th-leading cause of death in the United States. It is associated with a progressive loss of motor control (e.g., shaking or tremor at rest and lack of facial expression), as well as non-motor symptoms (e.g., depression and anxiety). There is no cure for Parkinson's and 60,000 new cases are diagnosed each year in the United States alone. 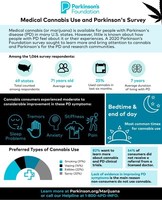