SANTA CLARITA, Calif., Feb. 13, 2020 /PRNewswire/ -- Princess Cruises, the international premium cruise line known for its legacy of romance and co-starring role on the hit TV show "The Love Boat," set the GUINNESS WORLD RECORDS title for the largest multi-location vow renewal after 1,443 couples reaffirmed their love for one another during simultaneous ceremonies onboard three ships. 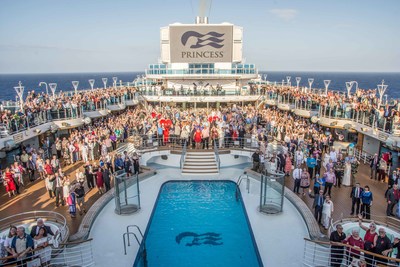 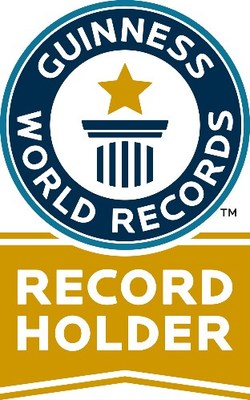 The record-breaking mass renewal of vows ceremonies took place on the top decks of Regal Princess, Royal Princess and Crown Princess, on February 11, 2020, with three official GUINNESS WORLD RECORDS Adjudicators on each ship to verify the record. The previous record was 1,201 couples, set in Kalamazoo, Michigan.

"A record-setting accomplishment has to be measurable, verifiable and have a single superlative," explained Michael Empric, GUINNESS WORLD RECORDS Adjudicator onboard Regal Princess. "It's always exciting being a part of a new official record, especially when it's aboard 'The Love Boat.' You could feel the excitement and love in the air from all of the couples participating in this monumental moment with Princess."

Celebrity officiants onboard Regal Princess sailing in the Caribbean included Gavin MacLeod, who portrayed the endearing Captain Stubing on "The Love Boat" with his television daughter, Jill Whelan, who played Vicki, serving as matron of honor. For those couples sailing onboard Royal Princess to Cabo San Lucas and Crown Princess, also in the Caribbean, the Captains of each ship officiated the ceremony.

"For more than 20 years, Princess has hosted renewal of vows ceremonies, helping thousands of couples reconnect and celebrate their love for one another," said Gavin MacLeod, Princess Cruises ambassador. "This is the first time we attempted to break a GUINNESS WORLD RECORDS title so this particular milestone is extra special and it's been amazing to hear from the guests who booked this cruise especially to become a part of history with Princess Cruises."

Princess has long been synonymous with romance, from being the first cruise line to have a wedding chapel with the unique option to have the ship's Captain marry couples at sea to more recent awards for being the world's "most romantic cruise line." Each year on Valentine's Day, Princess ships hold mass renewal of vows ceremonies so couples can reaffirm their love to one another. Visit www.princess.com/Celebrate for more information.

In 2017 Princess Cruises, with parent company Carnival Corporation, introduced MedallionClass Vacations enabled by the OceanMedallion, the vacation industry's most advanced wearable device, provided free to each guest sailing on a MedallionClass ship. The award-winning innovation offers the fastest way to a hassle-free, personalized vacation giving guests more time to do the things they love most. MedallionClass Vacations will be activated on five ships by the end of 2019. An activation plan will continue across the global fleet in 2020 and beyond.

Princess Cruises continues its multi-year, "Come Back New Promise" – a $450 million-dollar product innovation and cruise ship renovation campaign that will continue to enhance the line's onboard guest experience. These enhancements result in more moments of awe, lifetime memories and meaningful stories for guests to share from their cruise vacation. The product innovations include partnerships with award-winning Chef Curtis Stone; engaging entertainment inspired shows with Broadway-legend Stephen Schwartz; immersive activities for the whole family from Discovery and Animal Planet that include exclusive shore excursions to onboard activities; the ultimate sleep at sea with the award-winning Princess Luxury Bed and more.

Two new Royal-class ships are currently under construction - Enchanted Princess, scheduled for delivery in June 2020, followed by Discovery Princess in November 2021. Princess previously announced that two new (LNG) ships which will be the largest ships in the Princess fleet, accommodating approximately 4,300 guests are planned for delivery in 2023 and 2025. Princess now has four ships arriving over the next five years between 2020 and 2025. The company is part of Carnival Corporation & plc (NYSE/LSE: CCL;NYSE:CUK).