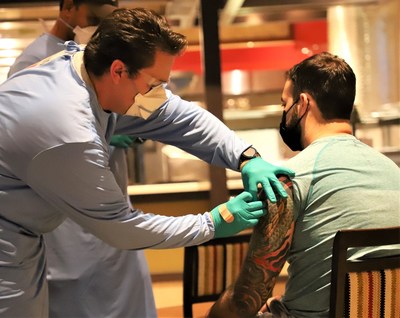 All team members who have been fully vaccinated and who show their COVID-19 Vaccination Record Card to their local human resources department or Hard Rock Cafe general manager will automatically receive a $50 gift card.  In addition, all team members who report their vaccination and claim a gift card will be entered into a drawing for the 2021 Jeep Cherokee and cash prizes to be held Oct. 31, 2021.

The "Rock Your Shot" vaccination incentive program is open to all full time and part time fully-vaccinated team members of company-owned or managed Hard Rock International and Seminole Gaming entities in the United States, including its hotels, restaurants, casinos and corporate offices.

Headquartered in Hollywood, Fla., Hard Rock International and Seminole Gaming together employ about 21,000 team members throughout the country.  Aggressive efforts to vaccinate team members have included providing shots in arms at workplaces and establishing flexible rules to encourage off-site vaccinations.

"We are committed to a safe working environment for all of our team members," said Jim Allen, Chairman of Hard Rock International and CEO of Seminole Gaming.  "With more team members vaccinated, there is less chance for the virus to spread to other team members and guests."

The vaccination incentive program is entirely voluntary and open to all fully-vaccinated team members in the past or in the future, up to the Oct. 31, 2021 drawing.  All vaccination information provided by team members will remain confidential, as required by federal government guidelines.

About Hard Rock®:Hard Rock International (HRI) is one of the most globally recognized companies with venues in 68 countries spanning 239 locations that include owned/licensed or managed Hotels, Casinos, Rock Shops®, Live Performance Venues and Cafes. HRI also launched a joint venture named Hard Rock Digital in 2020, an online sportsbook, retail sportsbook and internet gaming platform.  Beginning with an Eric Clapton guitar, Hard Rock owns the world's largest and most valuable collection of authentic music memorabilia at more than 86,000 pieces, which are displayed at its locations around the globe.

In 2021, Hard Rock International was awarded the Top Employer in the Travel & Leisure, Gaming, and Entertainment Industry by Forbes and also designated as a U.S. Best Managed Company by Deloitte Private and The Wall Street Journal.  In 2020, Hard Rock was honored as one of Forbes Magazine's Best Employers for Diversity and a Top Employer for Women.  Hard Rock Hotels & Casinos also received first place ranking in the 2020 Casino Gaming Executive Satisfaction Survey conducted by Bristol Associates Inc. and Spectrum Gaming Group.  In addition, Hard Rock Hotels was named one of the top performing hotel brands in J.D. Power's North America Hotel Guest Satisfaction Study for the second consecutive year.  Hard Rock destinations are located in international gateway cities, including its two most successful flagship properties in Florida and home to the world's first Guitar Hotel® in South Florida, Global Gaming's 2020 Property of the Year.  The brand is owned by HRI parent entity The Seminole Tribe of Florida.  For more information on Hard Rock International visit www.hardrock.com.

About Seminole GamingSeminole Gaming manages seven Florida gaming locations for the Seminole Tribe of Florida, including Seminole Hard Rock Hotels & Casinos in Tampa and Hollywood, Fla.  Seminole Gaming has long been recognized for its industry innovations and success.  The Seminole Tribe was the first Indian Tribe in North America to open a high-stakes bingo hall and casino, which debuted in 1979 and became the forerunner of the Indian Gaming movement.