LOS ANGELES, Aug. 11, 2020 /PRNewswire/ -- Therabody™, formerly known as Theragun®, the global leader in tech wellness and percussive massage therapy, officially announced today that tennis champion and entrepreneur Maria Sharapova has made an investment in the company while joining Therabody as a strategic advisor. In addition to this capital investment, Sharapova will play an instrumental role in supporting the company's global growth strategy as a member of its Advisory Board. 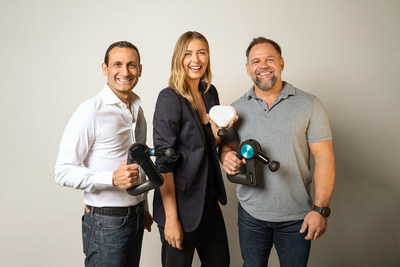 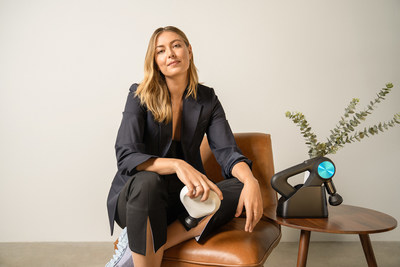 "Throughout my career, as both an athlete and entrepreneur, it's been important to me to work with brands and partners that have great potential and can have a positive impact," said Sharapova. "Since Therabody's launch, they have continued to demonstrate they are on the cutting-edge of combining technology, fitness, and wellness, bringing more balance to people's lives. I'm thrilled to join the team as they continue their mission to transform and revolutionize the tech wellness space."

After retiring from professional tennis in February 2020 as a five-time Grand Slam title winner, Sharapova has been investing in health and wellness companies. Parlaying her extensive business acumen and professional sports background, Sharapova's involvement as a strategic advisor with Therabody will go above and beyond the scope of a traditional investor, working with Therabody on its product offerings, advising on strategic initiatives from concept to execution as well as supporting the company's continuing expansion in the European and Asian markets. As a member of Therabody's Advisory Board, Sharapova will also play a critical part in helping advise and liaise on company partnerships, growth strategies, and Therabody's future direction within the burgeoning tech wellness space.

"I am proud to welcome  Maria Sharapova to our Therabody family as an investor and strategic advisor," said Benjamin Nazarian, CEO of Therabody. "As we continue to innovate and offer whole-body wellness products, Maria shares Therabody's vision to improve people's lives with natural wellness solutions. As a former professional athlete, she knows exactly how to recover and take care of her body on and off the court. The Therabody team is excited to work with Maria to use that experience to share with our growing community to continue to change people's lives."

A former No. 1 ranked tennis champion, and the 7th female tennis player ever to complete the career Grand Slam, Sharapova understands the value of unifying technology with sports, wellness, and recovery. Following Theragun's rebrand to Therabody in May 2020, the brand has become an undisputed industry leader to integrate these respective fields. In tandem with the rebrand, Therabody also launched its proprietary USDA Certified Organic CBD line, TheraOne, last month. Sharapova's involvement with Therabody will also help expand the company's future wellness offerings, developing new products beyond its two current divisions of Theragun and TheraOne.

ABOUT THERABODY Theragun® was created in 2008 and officially launched in 2016 by chiropractor Dr. Jason Wersland after suffering a life-altering injury. Building on over a decade of research and development, the brand's gold standard Theragun Percussive Massage Therapy devices use proprietary state-of-the-art technology to effectively reduce muscle tension, accelerate recovery, and improve performance. Theragun is the most trusted percussive massage therapy device among professional sports teams, professional athletes, celebrities, world-renowned trainers, physical therapists, and people in more than 60 countries. In 2020, Theragun rebranded to Therabody™, continuing its mission to provide natural wellness solutions through innovation in the percussive massage therapy space, developing and introducing the first of its kind Smart Percussive Therapy™ technology, seamlessly connecting to the Therabody app via Bluetooth® as well as launching its own U.S. grown and USDA Certified Organic CBD line, TheraOne. For more information on Therabody's latest products and to stay up to date on company news, visit www.Therabody.com and follow the brand on social media via Instagram, Facebook, and Twitter. The Therabody app is available for download for iOS on the Apple App Store and for Android on the Google Play Store.

ABOUT MARIA SHARAPOVAMaria Sharapova is a world-class tennis champion and entrepreneur. After moving to the United States from Russia at age six to pursue her tennis career, Maria turned professional at age 14. She won Wimbledon at age 17 - the first of her five career Grand Slam titles - and was the 7th female player in the open era to complete the career Grand Slam.

Outside of tennis, Maria is the founder and CEO of her premium candy brand, Sugarpova, where she oversees the day-to-day decision-making and growth of the company — from creative branding and packaging to product R&D and retail expansion. She is also an active investor and mentor, supporting the next generation of entrepreneurs. In addition to her work as an athlete and entrepreneur, Maria is passionate about design and architecture, and brings a creative and hands-on approach to all of her projects.