CHICAGO, Sept. 9, 2021 /PRNewswire/ -- Terry Brennan died on Tuesday evening at 93 years old. Filled with seemingly endless energy and passion for life, Brennan was preparing for a book signing and radio interview during half-time of the Fighting Irish's home kick-off this weekend. 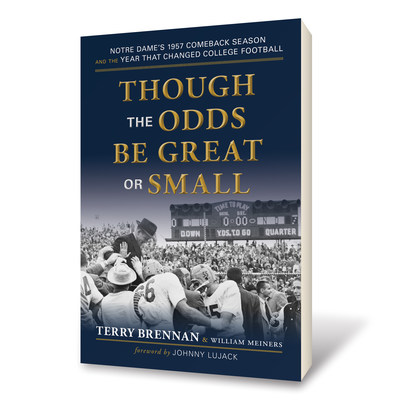 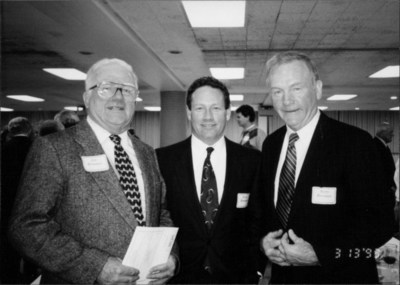 Terry Brennan, the youngest head coach in Notre Dame History, passes away at 93

Forever quick with a quip, Brennan referred often to the age-old one-liner about the three toughest jobs in America: The President of United States, the mayor of New York City, and the head coach of Notre Dame football. With a wink, he'd remind us that he was the head coach for the Fighting Irish from 1954 to 1958 and although it went by all too quickly, he remembered every moment of it.

Brennan's tenure in South Bend is the centerpiece of one of the critical eras of the Fighting Irish's fabled football tradition and the subject of the new book "Though the Odds Be Great or Small: Notre Dame's 1957 Comeback Season and the Year That Changed College Football," coauthored with William Meiners (Loyola Press, August 24, 2021).

Though the Odds Be Great or Small is the full telling of Coach Brennan's story as he pulled a program in distress back from the brink of disaster and provided the game plan for one of the vaunted program's greatest all-time wins and one of the biggest upsets in football history. As most who follow college football can agree, there is the Mount Rushmore of legendary Notre Dame head coaches over their many decades of dominance—Knute Rockne, Ara Parseghian, Lou Holtz, and Frank Leahy. In 1954, at the age of 25, Brennan replaced the legendary Leahy who had grown too controversial and powerful for the university's comfort. They needed a new direction. Brennan provided that.

As a player for Notre Dame under Leahy, Terry Brennan was a star known for his speed and grit. As a coach, he was cerebral and adaptable, preaching fundamentals and smart play while exhibiting maturity beyond his years. But it was an era when Notre Dame greatly favored academics over athletics and the young coach found his scholarships cut. Football is a game of numbers and his ranks of championship-caliber talent faded as scholarships dwindled leading to a disastrous 2-8 season in his third year as coach—1956. Thereafter, the bright lights of the Notre Dame fishbowl grew infinitely brighter. Could he be able to prove that the 1956 season was an anomaly and rise from the ashes in 1957? Could he prove to the Notre Dame faithful that he deserved one of the premier jobs in sports?

Yes, he could. And, against all odds, he did.

Respect, by almost any measure, is not guaranteed as a college football coach, but Terry Brennan earned almost universal respect from most of the legendary coaches of the era while steering Notre Dame through those five seasons with quiet confidence, good sportsmanship, and a disarming smile. And with a 32-18 record, it was a truly controversial decision for Notre Dame to fire the father of four just prior to Christmas in 1958. Brennan was disappointed, hurt and more than a little angry, but he moved on to other challenges over the next 60 years—with little fanfare and even fewer headlines. Yes, life was full for the father of six, grandfather of 27, and great grandfather of 30.

Ironically, the telling of his 5-year stint at Notre Dame was also the perfect capstone for a life lived well – heavy on virtues and full of purpose as Brennan was a touchstone for countless people looking to be their best self. At his side throughout to compilation of the book, Brennan's oldest son, Terry Jr. was blessed with one last journey with his dad through the past as they documented the foundation for the future.

About the AuthorsTerry Brennan played halfback at the University of Notre Dame from 1945 to 1948. In 1954, at the age of 25, he became Notre Dame's youngest head football coach, serving as head coach until 1958. In his five seasons as head coach for the Fighting Irish, Terry Brennan compiled an overall record of 32–18 while playing one of the most challenging schedules in college football history.

William J. Meiners is a writer, an editor, and the founder of Sport Literate, which celebrated its 25th anniversary issue in 2020 as a preeminent journal for all things sports.

Terry Brennan, Jr. served as a collaborator for the book and can speak easily and eloquently on his father's remarkable journey compiling amazing memories and lessons learned.

About Loyola PressAn apostolate of the USA Midwest Province of the Society of Jesus, Loyola Press embraces the Jesuit passion for helping people find God in all things. We continue the Jesuit tradition of excellence and service by providing inspiring faith-filled content for children and adults and by being people for others.