WEIFANG, China, Sept. 30, 2020 /PRNewswire/ -- On September 26, more than 1,100 kite lovers from 31 provincial regions in China gathered in the kite capital of Weifang in east China's Shandong Province to attend the opening ceremony of the 37th Weifang International Kite Festival, according to the Publicity Department of Weifang People's Government. 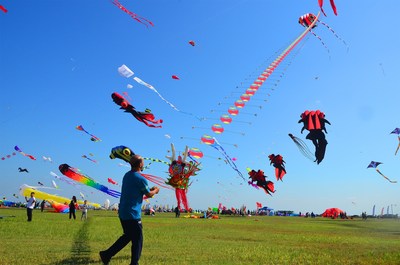 The COVID-19 epidemic has made it impossible for foreign players to participate in Weifang, but online platforms allowed them to join the festival, with 51 kite teams from 45 countries and regions sharing their kite-flying on screens to echo the audience on the spot. This is also the first time for the fair to be held in autumn.

The festival, which will last until October 8, seeks to promote a forward-thinking, open and charming kite culture. It will also see other events held such as the 2020 Diplomatic Envoy and International Sister City Mayor Weifang Tour, the 2020 Belt and Road International Dance Conference and the 15th "Kite Cup" Standard Dance International Open.

Weifang International Kite Festival has been held for 36 consecutive sessions, becoming the largest kite cultural activity in the world and an exchange platform for Shandong to spread Chinese culture and make friends with other countries.

On the afternoon of the opening ceremony, a signing ceremony was held for key cooperation projects of the fair and the China-Japan-Korea Industries Expo, involving 29 projects with a total investment of 13.941 billion yuan.

Weifang is seeking to attract both investment and talents to create a new high ground for opening up to the outside world and promote high-quality development, said Liu Jianguo, Weifang's vice mayor.

Liu said that the local government has rolled out a series of policies and measures to promote investment promotion and development, support talent innovation and entrepreneurship, among others, to create a first-class environment for all parties to invest in Weifang, adding that these contracted projects are in line with Weifang's industrial development and city function plans.