"The AIM system, when implemented, will provide an effective tool to quickly identify import surges and duty evasion that threaten the U.S. aluminum industry," said Mark Duffy, Chief Executive Officer of the APAA.  "For instance, the AIM system would have allowed for quicker identification of the ongoing Canadian import surge that is currently threatening the effectiveness of the Section 232 program."

This surge is in direct contravention to Canada's agreement to prevent surges at the time the exemption was granted. Under the May 2019 agreement between the United States and Canada, the Canadians agreed that if a surge did occur, the Section 232 tariffs would be reimposed.

The APAA is calling on the Trump Administration to save the Section 232 program by repealing Canada's exemption as provided for under the original agreement. The surge of Canadian imports following Canada's exemption from the program has collapsed U.S. prices, undermined the relief, and now threatens the continued viability of the industry.

Canada exports the overwhelming majority of its primary aluminum production, most of which is targeted at the United States.  At a time when the Canadian Government was advocating for the U.S. to remove the tariffs, the Canadian Government was providing subsidies to its industry to increase production and capacity and restart one of its idled smelters. These subsidies were in addition to Canadian subsidies already identified by the Organization for Economic Cooperation and Development. Just as the tariffs on Canada were lifted, this subsidized Canadian production began to surge back into the U.S. market.

The recent announcement that a U.S. smelter in Ferndale, Washington will be closed illustrates the real costs of allowing Canadian producers unconditional access to the U.S. market. The closure will put 700 U.S. workers out of jobs, in the middle of a pandemic that has seen unemployment claims soar at unprecedented rates.

"America's primary aluminum industry supports critical U.S. domestic supply chains that are essential to U.S. economic security," added Mr. Duffy. "The U.S. primary aluminum industry is at a critical juncture, it's very continued viability is at stake. Even before the pandemic, Canadian producers were flooding the U.S. market, crippling pricing and jeopardizing the continued viability of the U.S. industry.  In the current environment, these problems are magnified."

"The Canadians allowed their exports to surge and have not kept their word. In light of Canada's failure to respect the terms of the agreement, the tariffs must be reinstated," said Mr. Duffy. "The APAA urges the immediate reinstatement of the tariff on primary aluminum imports from Canada as provided for under the terms of its exemption." 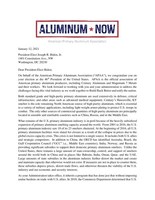 APAA Congratulates President-Elect Biden and Calls for the...