PARIS, Sept. 21, 2021 /PRNewswire/ -- Throughout the first half of 2021, still seriously inhibited by the health crisis, the Fine Art auction market secured the continued circulation of artworks. In fact, the auction majors managed to project a substantially more attractive image of their activities by a savvy mix of online sales, thematic and charitable sales and a daring collaboration with what would traditionally be called the 'primary' market. In addition, the auctioneers have at last opened their doors to dematerialized artworks and have been surfing on a wave of ultra-Contemporary art that has also caught the attention of the mainstream media. 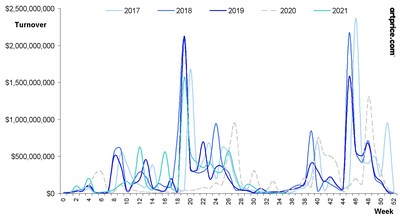 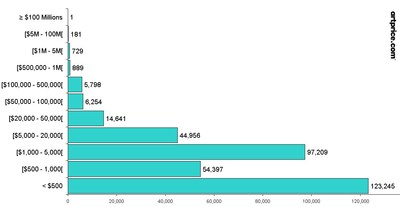 Comparison between the last five years

thierry Ehrmann, CEO and founder of Artmarket.com and of its Artprice department:

"Artprice has registered the highest-ever number of successful Fine Art adjudications in the world, up +10.5% compared with H1 2019, which already set a historic record.

The absence of international fairs has clearly redirected some collectors to the auction houses (live or online), but the growth in the volume of transactions predates the health crisis and is basically just re-starting again."

After a chaotic year 2020, the art market's auction agenda essentially returned to normal, notably with the resumption of New York's spring sales. The sessions organized during week 19 (from 10 to 16 May 2021) totaled $1.5 billion in New York, equivalent to 21% of global art auction turnover in H1 2021.

However, our data for the H1 period suggests the art market is still relatively affordable: of the 302,100 lots auctioned around the world, 51% were acquired for less than $1,000, including buyers' fees. And, unlike the ultra high-end market, these affordable works have been offered and sold very evenly throughout the year. Online sales now even ensure a low level of art market activity during the months of July and August, which are usually marked by a complete standstill.

The former British colony is now playing a vital role in the international strategies of the auction majors like Christie's, Sotheby's, Phillips and Bonhams, but also of China Guardian and Poly Auction, and together they have made Hong Kong the most luxurious art marketplace on the planet.

In just six months, 18 lots fetched over $10 million in Hong Kong although none reached $50 million. Today, Hong Kong's ultra high-end market is as intense as London's, and nine times bigger than the Paris market (where two lots crossed the $10 million threshold in the same period). In mainland China, only eight lots sold for more than $10 million over the same period, but the $50 million threshold was once again breached (for an 18th century work by Xu Yang).

Sotheby's sale entitled "The Fungible Collection" was a perfect example of the creativity shown by the major auction houses in H1 2021. The international auction company acquired by Patrick Drahi in 2019 worked directly with the anonymous artist Pak and the web platform Nifty Gateway (without going through a gallery) to sell an unlimited series of NFTs.

Core to the collection was the Open Editions, which allowed collectors to purchase as many fungible cubes as they wished during the sale period for fixed prices. The duration of the sale was three times 15 minutes, spread over three days, and the price rose each day. It resulted in the sale of 23,598 digital cubes: 19,737 cubes at $500 on Day 1; 3,268 cubes at $1,000 on Day 2 and 593 cubes at $1,500 on Day 3. In addition to these small works, there were two unique lots (The Switch for $1.44 million, and The Pixel for $1.35 million) as well as several 'awards'. Some NFTs (potentially worth several million dollars) were awarded to the best buyers, as well as to anyone who managed to solve a puzzle invented by Pak.

This extraordinary session questioned not only the notion of a digital artwork and its 'ownership', but also the notion of value creation in the 'Art Market 2.0', in which the offer can be multiplied at a lower cost.

Discover Artmarket and its Artprice department on video: www.artprice.com/video

See certified biography in Who's who ©:https://imgpublic.artprice.com/img/wp/sites/11/2021/06/Biographie_nov2020_WhosWho_thierryEhrmann.pdf

Artmarket is a global player in the Art Market with, among other structures, its Artprice department, world leader in the accumulation, management and exploitation of historical and current art market information in databanks containing over 30 million indices and auction results, covering more than 770,000 artists.

Artprice Images® allows unlimited access to the largest Art Market image bank in the world: no less than 180 million digital images of photographs or engraved reproductions of artworks from 1700 to the present day, commented by our art historians.

Artmarket with its Artprice department accumulates data on a permanent basis from 6300 Auction Houses and produces key Art Market information for the main press and media agencies (7,200 publications). Its 4.5 million 'members log in' users have access to ads posted by other members, a network that today represents the leading Global Standardized Marketplace® to buy and sell artworks at a fixed or bid price (auctions regulated by paragraphs 2 and 3 of Article L 321.3 of France's Commercial Code).

Artmarket with its Artprice department, has been awarded the State label "Innovative Company" by the Public Investment Bank (BPI) (for the second time in November 2018 for a new period of 3 years) which is supporting the company in its project to consolidate its position as a global player in the market art.

Index of press releases posted by Artmarket with its Artprice department:serveur.serveur.com/press_release/pressreleaseen.htm

Discover the alchemy and universe of Artmarket and its artprice department https://www.artprice.com/video headquartered at the famous Organe Contemporary Art Museum "The Abode of Chaos" (dixit The New York Times): https://issuu.com/demeureduchaos/docs/demeureduchaos-abodeofchaos-opus-ix-1999-2013

L'Obs - The Museum of the Future: https://youtu.be/29LXBPJrs-o

Artmarket.com: as the health crisis recedes, the FIAC keeps one...