BEIJING, Sept. 21, 2021 /PRNewswire/ -- The Chinese Mid-Autumn Festival, celebrated on September 21 this year, is an occasion for family reunions. It is a day on which many people believe dreams come true when the moon is at its fullest.

On this day, let's take a look back at 2021, which has so far witnessed many of the Chinese dreams come true, including the fulfillment of the first centenary goal of building a moderately prosperous society in all respects and the successful completion of the Shenzhou-12 manned spaceflight mission.

"Through the continued efforts of the whole Party and the entire nation, we have realized the first centenary goal of building a moderately prosperous society in all respects," Chinese President Xi Jinping declared at a ceremony marking the centenary of the Communist Party of China (CPC) on July 1.

With the announcement, China brought about a historic resolution to the problem of absolute poverty. The country is now marching toward the second centenary goal of building China into a great modern socialist country in all respects.

Within eight years, China successfully lifted the final 98.99 million impoverished people out of poverty, together with 832 impoverished counties and 128,000 villages.

China spent a total of nearly 1.6 trillion yuan (about $246 billion) on eradicating poverty through a strategy of targeted poverty alleviation, striving to eradicate poverty through development.

Since the 18th National Congress of the Communist Party of China (CPC) in 2012, Xi has presided over seven central poverty alleviation work symposiums, conducted over 50 research tours on poverty reduction and visited all of China's 14 contiguous impoverished areas.

Millions of cadres were sent to the front line of poverty alleviation. Among them, over 1,800 workers lost lives for the country's great cause.

In Xi's words, the eradication of absolute poverty has represented a miraculous achievement in China. The victory has been secured through the combined efforts of the whole Party and the nation.

China's space dream is another highlight of the year 2021. The country declared a complete success of the Shenzhou-12 manned spaceflight mission after three Chinese astronauts landed safely on Earth on September 17, ending their three-month space travel.

On April 29, China launched the Tianhe core module of the China Space Station. Just as Xi said during his conversation with the astronauts on June 23, "the construction of the space station is a milestone in China's space industry, which will make pioneering contributions to the peaceful use of space by humanity."

Xi's words unveiled China's relentless spirit in its pursuit of space exploration. In fact, Xi has always been watching closely over the growth of China's aerospace industry.

Since the 18th CPC National Congress in 2012, the Chinese president made several important instructions on the development of the industry, hoping it would continue making new breakthroughs through innovation and self-reliance.

From the launch of China's first man-made space satellite Dongfanghong-1 to the Shenzhou-12 spacecraft, these 50 years have witnessed how China is striving to pursue its dream of "flying into the sky and reaching for the moon."

With the approaching of the Beijing 2022 Winter Olympics, China's dream of hosting the Games is going to come true for a second time, which will also make Beijing the first city in the world to host both summer and winter Games.

From dreaming to host Olympics in 1908 to finally hosting the Summer Olympics in 2008, the century-old dream witnessed the Chinese nation's journey toward prosperity.

China is now inviting the whole world to join a "wonderful, extraordinary and remarkable" Winter Olympics. Looking into the future, there are more Chinese dreams that await fulfillment.

From grassroots to lawmaker: A glimpse of China's 'whole-process... 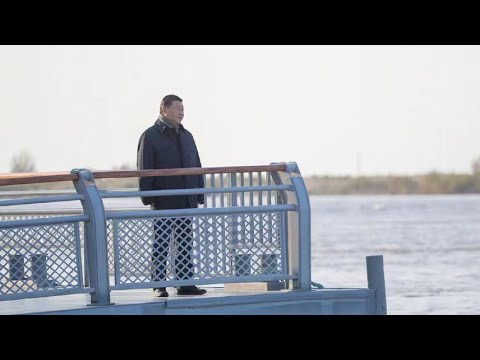