The pandemic, which has infected over 57.4 million people and killed over 1.3 million worldwide, has exposed many weak links in global governance. The international community is wondering what the Group of 20 (G20) can do to make the system better, Chinese President Xi Jinping said when addressing the G20 Riyadh Summit via video link.

Xi said the G20, playing an irreplaceable role in the global fight against COVID-19, should uphold multilateralism, openness, inclusiveness, mutually beneficial cooperation, and keep pace with the times.

"We should keep our support for developing countries and help them overcome the hardships caused by the pandemic," Xi told other G20 leaders, urging the world's leading economies to pursue more inclusive development.

China has fully implemented the G20 Debt Service Suspension Initiative (DSSI) while overcoming its own difficulties, with the total amount exceeding $1.3 billion, he noted.

The G20 launched the DSSI in April to address the immediate liquidity needs of low-income countries, allowing the debt service payments due from May 1 to the end of the year owed by the most impoverished countries to be suspended. The debt suspension will be extended by another six months until June 30, 2021, the G20 finance ministers and central bank governors decided in October.

China ranked first among the G20 members in terms of debt deferral amounts under the DSSI for the poorest countries, Finance Minister Liu Kun said recently.

"China will increase the level of debt suspension and relief for countries facing particular difficulties and encourage its financial institutions to provide new financing support on a voluntary basis and according to market principles," Xi said in his speech.

He reaffirmed China's commitment to help and support other developing countries through making COVID-19 vaccines a public good that is accessible and affordable around the world.

The Chinese president also called on the G20 to promote free trade, oppose unilateralism and protectionism, and safeguard developing countries' right to and space of development.

"We need to build up capacities for tackling global challenges," Xi stressed. "The most pressing task of the moment is to shore up the global public health system and contain COVID-19 and other infectious diseases."

G20 members should work together to enhance the role of the World Health Organization and build a global community of health for all, he said.

Meanwhile, the president called for international cooperation to protect the environment, fight climate change and build a "clean and beautiful world where man and nature coexist in harmony."

China announced in September that it would strive to achieve carbon neutrality before 2060. The country aims to have CO2 emissions peak before 2030.

The G20 should also play a leadership role in promoting innovation-driven development in the digital age and improve economic globalization, according to Xi.

Noting that the pandemic has fueled a boom in new technologies and business forms, he called for action to turn the crisis into an opportunity.

"We may deepen structural reform and cultivate new growth drivers through scientific and technological innovation and digital transformation," he said.

Commenting on the backlash against economic globalization, he called for challenges to be addressed head-on and globalization to be made "more open, inclusive, balanced and beneficial to all."

China's move to establish a new development paradigm will create more opportunities for countries around the world to share its achievements in pursuing high-quality economic development, Xi told other leaders attending the summit.

China's top leadership has made a strategic decision to foster a new development paradigm with the domestic circulation as the mainstay, and internal and external circulations reinforcing each other.

"China will always be a builder of global peace, a contributor to global development and a defender of international order," Xi said. "We may bridge differences through dialogue, resolve disputes through negotiation, and make a joint effort for world peace and development." 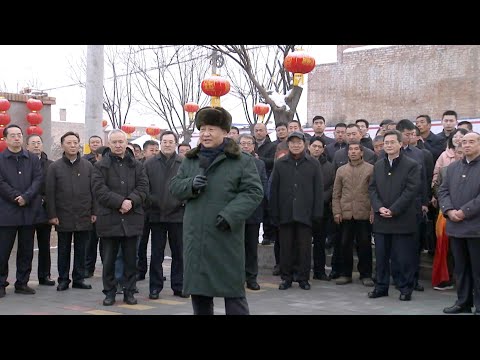